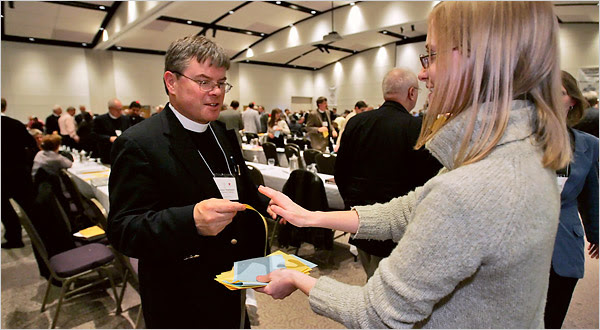 Representatives from the Episcopal Diocese of Pittsburgh voted Friday on a first step toward leaving the national church.

JOHNSTOWN, Pa., Nov. 2 — By more than a two-to-one vote, members of the Episcopal Diocese of Pittsburgh voted Friday in favor of separating from the national church because of a theological rift that began with the consecration of an openly gay bishop in 2003.

The vote sets the stage for what could become a protracted legal battle between the diocese and the Episcopal Church U.S.A., which had warned Pittsburgh’s bishop not to go forward with the vote.

After passionate appeals from both sides of the debate, clergy members and lay people voted 227 to 82 to “realign” the conservative diocese.

If Friday’s vote is approved again in a year, the diocese will begin steps to remove itself from the American church and join with another province in the worldwide Anglican Communion.

After the vote, Bishop Robert W. Duncan of Pittsburgh, who is also moderator of the Anglican Communion Network, an alliance of conservative dioceses and parishes, defended the decision.

“What we’re trying to do is state clearly in the United States for the authority of Scripture,” Bishop Duncan said after the vote, taken during the diocese’s annual convention in this city about 50 miles east of Pittsburgh.

The vote was necessary, he said, because the more liberal bishops now in the majority in the national church “have hijacked my church, and that’s how most of the people here feel.”

Some who opposed separation said it would create nothing but chaos for the diocese.

“I think it was tragic,” said Joan Gunderson, president of Progressive Episcopalians of Pittsburgh and a lay deputy who voted against the resolution. “I’m concerned what will follow.”

A day earlier, the head of the Episcopal Church U.S.A., Presiding Bishop Katharine Jefferts Schori, sent Bishop Duncan a letter, warning him that he could face discipline and civil suits if he “committed canonical offenses” including overseeing approval of the resolution.