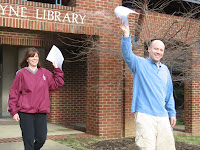 I went to seminary with Todd and Diane Vie at Virginia Theological Seminary. They are wonderful people and great priests. I ran across this article about them in the Lynchburg (VA) News & Advance Newspaper. You can also read it HERE, and here.

Have a great day!
Peace be with you,

A pair of priests
By Casey Gillis
cgillis@newsadvance.com

The Revs. Todd and Diane Vie followed different paths to the priesthood.

Diane, now assistant priest at St. John’s Episcopal Church, first heard her calling in 1998 while on a mission trip to Honduras.
Todd, her husband of 15 years, heard his call later that same year, quite unexpectedly.

“Never in my wildest dreams did I ever think I’d be called, which made it all the more enjoyable,” says Todd, now associate priest at St. Paul’s Episcopal Church.

At the time, both Todd and Diane worked for a Chicago insurance company, where they met in 1988.

Soon after hearing their respective calls, the couple started the process of entering the priesthood, and they’ve been in it together ever since.

Two years after the process began, Todd and Diane were approved as postulants, meaning they’d received parish and diocesan endorsements to go on to seminary.

They both quit their insurance jobs on the same day and enrolled in Alexandria’s Virginia Theological Seminary in the fall of 2004.

“The tricky thing for us was we were going through it at the same time,” Diane says. “It was very unusual in the diocese. They couldn’t decide what to do with us.”

The Virginia Theological Seminary is a three-year program. The couple says the first year is mostly academic work, while the second and third years involve an assignment at a field parish. Todd and Diane were assigned to the same field parish.

“We had a built-in support system right off the bat.”

The couple has a daughter, Amanda, now 8, and say balancing her schedule and activities with their own schooling was complicated.

“We wanted her to have as positive an experience as she could have,” Todd says. “We knew that all three of us being full-time students was going to be challenging.”

So the couple tried to arrange their respective schedules so that they took most classes during the day, and “when it was time to pick (Amanda) up, we were done,” Todd says.

During their final year at seminary, they met with the Rev. Michael Sullivan, rector at St. John’s, for an interview.

Sullivan wanted the Vies to come to Lynchburg, so he offered Diane the job at St. John’s and told Todd about an opening that might be available at St. Paul’s. Both churches are part of the same diocese.

“I realized they both had great gifts for ministering, and they’d be a great fit for Lynchburg,” Sullivan says. “They bring a wealth of pastoral care experience, and a dedication to mission and outreach. And for the congregations here, those would be primary needs. So it’s just a great match.”

But before they could accept the jobs in Lynchburg, Todd and Diane, who graduated from seminary in May 2007, had to get approval from their bishop in Chicago.

“Usually, you go back to the diocese you came from,” Todd says.

Their bishop told them to look in Chicago first, but the positions in Lynchburg wound up being the best fit.

“They’re approachable, and they understand their roles … to preach the gospel in a way that others find accessible,” Sullivan says of the couple. “They have great senses of humor and are extraordinarily outgoing.”

After serving as deacons since their move to Lynchburg, Todd and Diane were ordained into the priesthood last month. The ceremony was held at St. Paul’s, and the post-ordination reception at St. John’s.

“Bringing the two churches together was amazing,” Todd says. “So many people said how wonderful it was.”

Sullivan says the couple’s love and support for each other was evident during the ceremony.

“It was one of the most beautiful services I have ever attended,” he says. “The music, the pomp and circumstance.

“Episcopal ordinations are a huge combination of ancient tradition and contemporary understanding. To see two priests ordained together is always special, but to see two who are a couple is extraordinary.”

Now that they’re both working full time, Todd and Diane say they face many of the same challenges they encountered while at seminary.

With regular services, pastoral care, the occasional night meeting and other duties, they’ve both got full plates and, like most working parents, are constantly trying to find a healthy balance between their home and work lives.

Their daughter usually takes turns attending each of their Sunday morning services.

“We really just say, ‘Where would you like to go this Sunday?’” Diane says.

But even with those challenges, the couple wouldn’t have it any other way.

“Truly serving God and serving people, and to be able to do that in a way that is so rewarding and feels so right, is a true gift,” says Diane.

Todd says he loves sharing a vocation with his wife.