A sermon by Kim Fabricius

Two numbers forever etched in our memories of infamy: 9/11. Reflecting back on the 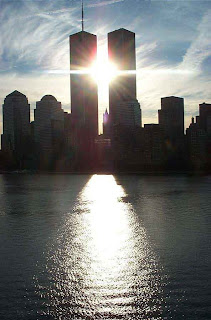 event a year later, one commentator (Stanley Hauerwas) wrote: It was “an apocalyptic moment Christians in America cannot ignore. Surely something like how we felt as we survived the days after September 11, 2001, is how the followers of Jesus felt after the crucifixion”: disbelief, confusion, grief, anger – and fear. We were all afraid of further acts of terror. The disciples too were afraid of further acts of terror – the state terror – of imperial Rome. What happened next?

For the followers of Jesus, there were two days of total eclipse, and then – resurrection! – an even more apocalyptic moment than the crucifixion: in Jewish thought resurrection belonged to the scenario of the end-times, when God would bring the old world of suffering and death to a dramatic conclusion and begin a new world of justice and joy. Surely a cause for celebration, you might think. But – observe – the immediate reaction of the disciples to the presence of the risen Christ is not joy – but, again, fear. A different kind of fear, the commentators tell us, than frightened fear, rather “awe” in the presence of the holy. But I wonder if there isn’t a bit of special pleading here. I wonder if there wasn’t that same fear-as-fright about their reaction, except now with a different object: not Caiaphas and Pilate but Jesus himself. For had not the cowardly disciples denied, betrayed, abandoned their leader to his fate? In other words, hadn’t they behaved in such a way as to invite and expect some sort of payback? Indeed, isn’t it that the most astonishing thing of all about the resurrection of Jesus: there was no payback!

Think of 9/11 again. On the third day, as it were, America rises from the dead, from the ashes of Ground Zero. What is the immediate reaction of the nation, embodied in the melodramatic speeches, soon to become military policy, of George Bush? What else but payback? First the easy pickings of Afghanistan, then the full-scale invasion of Iraq; and now here we are, five years later, with George Bush unbowed and unrepentant, in defiance of reason and evidence still speaking the empty rhetoric of freedom and democracy, still claiming that he did the right thing, and, notwithstanding the current anarchy and slaughter, eyes wide shut in denial, still declaring that he’d do it again: bring the superior firepower of the US, its swift and righteous sword, to bear on the evil and cowardly terrorists.

But after Easter, what does the crucified and risen Jesus do? Does he respond to his execution by marshalling that legion of angels he refused to deploy on Golgotha, smashing his way into the imperial palace with shock and awe, overwhelming the hopelessly outgunned royal guard, and exacting a righteous and terrible revenge on Pilate, who, of course, had form as a ruthless tyrant long before his showdown with the rebel from Galilee? Does he storm the Temple in a way that makes the disruptive demonstration the Sunday before look like the piece of street theatre that, in fact, it was, then advance beyond the court of Gentiles and invade the court of priests, seize the hapless Caiaphas and – how ironically apt – cast him from the spire he had once stood atop with the devil himself? Does he round up those reprehensible disciples, perhaps hood and humiliate them, or take them down to the pool of Bethesda for a bit of waterboarding, which, after all, isn’t really torture, or, at the very least, give them a tongue-lashing they’ll never forget and send them away in guilt and despair? None of the above. No violence, no vengeance – no payback!

So what does the crucified and risen Jesus do? He ignores Pilate and Caiaphas, his judges and executioners, completely. And when he meets his followers – who would believe it! – he says things like, “Do not be afraid,” and “Peace be with you.” He shows them his wounds to reassure them, and to demonstrate that even in his regnant glory his decorations will always be scars. And he commissions them to carry on his ministry – how? As avenging furies, agents of retribution? (“I’ll be back, through you, my shock troops, and this time it’s personal.”) No, no payback! Indeed the mission impossible he gives them is a ministry of forgiveness and reconciliation.

But why should this surprise us? Hadn’t the crucified One already disarmed his disciples in the garden, and forgiven his killers on Calvary? Will the risen One now change his mind? In John’s gospel Jesus breathes the Holy Spirit on the disciples as he gives them the gift of peace (John 20:21-22). This is John’s version of Luke’s Pentecost. But the peace of Christ is not for them alone. The man for others (Bonhoeffer) commissions a church for others. The peace they receive they must share, declare, and effect. And this peace takes the form of – forgiveness! Jesus says: “If you forgive people’s sins, they are forgiven; if you do not forgive them, they are not forgiven” (John 20:23). And though the construction looks like a conditional, as if forgiveness were discretionary – as if the disciples might grant forgiveness to this one but withhold it from that one – the key to Jesus’ command is its gracious sweep and urgency. Forgiveness itself is God’s judgement on sin, and forgiveness itself is the condition that makes justice possible. Wrath – whatever that might mean – must be left to the Father. This is John’s version of Matthew’s Great Commission.

Am I suggesting that forgiveness become the central plank of the West’s ethical foreign policy against terrorism? A counter-question: why the absolute astonishment, indeed repugnance, with which Christian themselves react to such a suggestion? Does it not, in fact, demonstrate – in the sense of “what difference does it make to our discipleship?” – that we do not live the truth that Jesus is the risen Lord, that we ignore the events of Holy and Easter week, as well as his life and teaching, that we honour the seventh beatitude more in the breach than the observance; rather we live as if Caesar (in whatever guise) were Lord, as if the events recorded in our tabloids rather than the stories of Jesus in the Bible define the “real” world, as if violence rather than peace were the origin, goal, and very grain of the universe? If being Christian trumped being American, British, or whatever, and if the church itself practiced a politics of peace, then at least we would have something to say to government that wasn’t the mere echo of its own loud voice.

It is a commonplace to say that the autumn of 2001 changed everything. In fact, 9/11 and its six-year wake has changed nothing. No, it was a spring weekend in the year 33, when there was a most rude interruption to the way the world does its business – a gruesome gibbet, an empty tomb, an unarmed man passing through barricades, waging peace – that is what changed everything. Though you wouldn’t know it. And why on earth should anyone, governments included, believe it when even the church doesn’t?

The American theologian Stanley Hauerwas was once asked, in his dissent from the war on terrorism: “Well, what alternative foreign policy do you have to bombing Afghanistan [and invading Iraq]?” Hauerwas replied: “My only response is [that] I do not have a foreign policy. I have something better – a church constituted by people who would rather die than kill.” People who believe in a saviour who would rather die than kill, who did die rather than kill, and who lives and rules the world – no payback! – with truth and grace, because God is non-violent, and in him there is no violence at all.
Posted by Peter Carey on Sunday, March 23, 2008