A PRAYER OF ANSELM

My God,
I pray that I may so know you and love you
that I may rejoice in you.
And if I may not do so fully in this life
let me go steadily on
to the day when I come to that fullness ...
Let me receive
That which you promised through your truth,
that my joy may be full 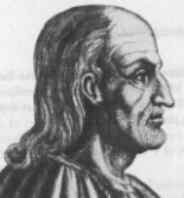 He was born in Italy about 1033, and in 1060 he entered the monastery of Bec in Normandy to study under Stephen Lanfranc, whom he succeeded in office, first as prior of Bec, and later as Archbishop of Canterbury.

In 1078 he was elected abbot of Bec. The previous year, he completed a work called the Monologium, in which he argues for the existence of God from the existence of degrees of perfection (Aquinas's Fourth Way is a variation of this argument).

In 1087, while still at Bec, he produced his Proslogium, an outline of his "ontological argument" for the existence of God. Taking as his text the opening of Psalm 14 ("The fool hath said in his heart: There is no God."), Anselm undertakes to show that the fool is contradicting himself -- that the concept of God is unique in that anyone who understands what is meant by the question, "Does God exist?" will see that the answer must be "Yes." The argument has received mixed reviews from the start. Almost at once another theologian, Gaunilon, wrote, "A Reply on Behalf of the Fool." Thomas Aquinas rejected Anselm's argument as inconclusive (and is followed in this by most Roman Catholic writers today). Kant practically made his reputation as a philosopher by explaining in detail what he thought was wrong with Anselm's argument. On the other hand, Leibniz and others have thought it valid.

King William II of England had no fondness for the Church, and at the death of Lanfranc he kept the See of Canterbury vacant until he was gravely ill, whereon he promised to let Anselm be made Archbishop. Anselm was made Archbishop (4 December 1093), the King recovered, and the two began to dispute the extent of the King's right to intervene in Church matters. Anselm went into exile in 1097 and remained in Italy for three years until the King died in 1100.

Email ThisBlogThis!Share to TwitterShare to FacebookShare to Pinterest
Labels: Anselm, Archbishop of Canterbury