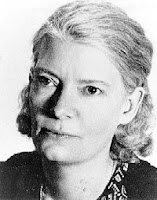 May 1 will be the 7th anniversary of the Catholic Worker's movement, and Marquette University Press has published 'The Duty of Delight,' a collection of Day's diaries, as well as a 2006 documentary, 'Don't Call Me a Saint,' is out on DVD. The Dallas Morning NewsReligion blog has further details:

Dorothy Day, the founder of the Catholic Worker Movement, was a pacifist, a champion of the poor, a Communist (for a time), a writer, and a hell-raiser who took part in countless demonstrations in support of workers, women, the poor and the disenfranchised.


She spoke her mind. Before embracing Catholicism, she led what was once colorfully called a 'bohemian' lifestyle. She had affairs, a common-law marriage, and a back-alley abortion, about which she wrote in a novel, 'The Eleventh Virgin.' 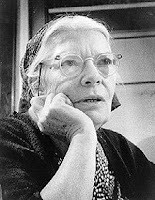 On May 1, the Catholic Worker Movement celebrates its 75th anniversary. Today, there are more than 185 Catholic Worker houses around the world, promoting 'nonviolence, voluntary poverty, prayer, and hospitality for the homeless, exiled, hungry, and foresaken.'

Read it all here.

Here is a preview of the video:

Email ThisBlogThis!Share to TwitterShare to FacebookShare to Pinterest
Labels: A Guy in the Pew, Catholic Worker Movement, Dorothy Day