Pastor in Trouble for Dropping "S-Bomb" in Sermon (satire)

Pastor in Trouble for Dropping "S-Bomb" in Sermon 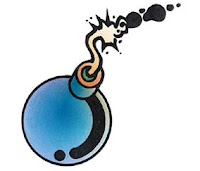 AKRON, OHIO - Life was good for Reverend Frank Grant, pastor of Abundant Life United Methodist Church. He and his family had recently relocated from Wheeling, WV in order for him to pastor at Abundant Life. The first five months went very well, with seventeen new people joining the church. The church family seemed to be united, they were reaching out to the community, and even the youth at least looked excited to be in church. Everyone was happy.

Then Rev. Grant shocked everyone, including his wife. During his sermon last Sunday morning, Grant dropped the "S-bomb."

Unlike most pastors, Grant has the habit of preaching through books. He loves the book of Romans. This past Sunday, Grant was preaching out of Romans 9 when he reached the section on Jacob and Esau. That's when it happened. Grant said to his church, "As difficult as it is for us to understand and admit, it sure seems like God is sovereign over this situation."

The audience reportedly just sat there in stunned silence for a few seconds. They tried to take it in. They tried to comprehend what they had just heard from the pulpit. A few were heard to say, "Did he just say what I think he said?" A few mothers quickly ushered their young children back to the nursery. The rumbling in the congregation gradually grew from a whisper to a discussion to a dull roar.

Needless to say, both the sermon and the service came to a quick end. Several of the leaders of the church approached Rev. Grant in confusion and disgust. Sunday School Director Ed Thomas said to Grant, "How could you do that? How could you use the 'S-word' in our church? Just as things were going so well for us, you had to go and ruin everything. I feel so bad for you and us."

Grant did not quite comprehend the gravity of the situation. At least not at first.

Then Philip Simms, a long-time member of Abundant Life, approached Grant, shouting, "I don't ever want to hear that kind of language from this pulpit again. You know better than that - you attended Asbury Seminary. How dare you try to take away my free will?!"

Now Grant understood. He slowly walked back to his office and started packing up his books.