Remake of "Room with a View" On Masterpiece Theater 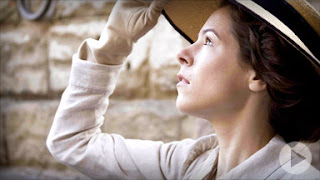 Twenty years ago, this novel and the 1985 film version helped motivate me to spend part of a year studying in Florence.

I always loved the original film, so I am watching the remake with some skepticism and trepidation, but it looks to be quite good and a nicely different take on this fine novel by E.M. Forster. 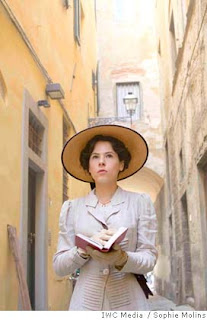 Room with a View on Masterpiece Theater this month.

From the Boston Globe:

This 'Room' looks on a different view

Most of the classic British novelists buried "impolite" topics below the surface. By oh-so-slightly indicating but not speaking about realities such as same-sex attraction, the authors - intentionally or not - conveyed the sense of a society teetering on the unspoken.

In the new installment of PBS "Masterpiece," screenwriter Andrew Davies decides to unearth a layer of gay subtext from E.M. Forster's "A Room With a View." Forster himself didn't publicly name gay love until after he was dead, with the posthumous publication of "Maurice." But Davies's adaptation, which premieres tomorrow night at 9 on Channel 2, clearly implies that Cecil Vyse, heroine Lucy Honeychurch's pretentious suitor, is - wink-wink - an "ideal bachelor." It also makes it known that the blushing Rev. Beebe, another "ideal bachelor," probably thought that Lucy was as fabulous as, say, Marlene Dietrich.

Oh well. This doesn't improve the story, and neither does Davies's other more significant alteration, which I won't spoil here. Davies, so adept in adapting Austen and Eliot for other television movies, tries to give "A Room With a View" a new twist or two, to make his version the product of a time when shame and illusion are no longer demanded. He clearly wants to give Forster's story, set in proximity to World War I, a small dose of truth serum. But he and director Nicholas Renton fail to add anything germane to Forster's story of love overcoming class difference. They've merely added on unnecessary gimmickry, notably an epilogue that bears shadings of Ian McEwan's "Atonement."

The new "Room" literally pales in comparison to the excellent 1985 Merchant-Ivory production. The colors are too-lightly saturated, and the actors appear almost ghostly. The whole drab production is begging for a visit from the "Color Splash" team over at HGTV. And this "Room" pales figuratively, too, as it fails to muster the inner spirit and comedy of Ivory's version. The central plot is the same: Lucy goes to Italy, falls for the unreserved likes of George Emerson, accepts an engagement to Cecil, then deals with her split emotions. But the follow-through is just so much less buoyant.

Elaine Cassidy, who starred in Atom Egoyan's "Felicia's Journey" and a TV adaptation of "Fingersmith," is quite a different Lucy from Helena Bonham Carter. Cassidy is plain and low-key as the young woman touring Italy with her prudish chaperone, Charlotte (Sophie Thompson). She is an appealing alternative to Bonham Carter, but she needs a more vivid supporting cast to play off. As Mr. Emerson and his son George, father and son actors Timothy and Rafe Spall are stubbornly underwhelming. Rafe gives George a strange primitive air that makes him seem more idiotic than sexy and free-thinking.

As Cecil, Laurence Fox is little more than dissolute, rarely seen without a drink or a cigarette. Like too much around him in this "Masterpiece," he evokes none of Forster's sense of subtlety.

Matthew Gilbert can be reached at gilbert@globe.com. For more on TV, visit boston.com/ae/tv/blog/.

From the Chicago Sun Times:
A fresh new 'View' into Forster's classic

Whatever you do, don't call tonight's production of "A Room With a View" on PBS a remake.

Yes, this film, based on the much beloved 1908 novel by E.M. Forster, covers the same basic plot as the 1985 Merchant and Ivory production. But scriptwriter Andrew Davies has mined Forster's satire on class and Edwardian morals even further than the 1985 film ever did. The end result is beautiful, romantic and poignant.

Davies based his new adaptation on both Forster's original novel and an afterword that the author penned for the book's 50th anniversary.

The film functions now as a memory play. The heroine, Lucy Honeychurch (played brilliantly by Elaine Cassidy with considerably much more life and spunk than Helena Bonham Carter in the better-known Merchant-Ivory film), still has her eyes opened on an eventful tour of Italy, but the film begins and ends with Lucy returning to the same fateful hotel room several years after the original novel had concluded. Time and events have changed her, but the room still offers a view of a world both familiar and foreign.

Timothy Spall (Peter "Wormtail" Pettigrew in the "Harry Potter" films as a bumbling, good-hearted businessman) shares screen time with his son Rafe as Mr. Emerson and his son George. The Emerson clan sets Lucy's transformation in motion when Mr. Emerson offers to switch his room with a better view with Lucy and her unmarried, nervous and meddling chaperone, Charlotte Bartlett (Sophie Thompson, both tragic and comic at the same time).

Rafe Spall brings some muchneeded averageness to the role. That isn't to say the younger Spall isn't charming or attractive, but that he succeeds in exuding more of a commonness than Julian Sands did in the 1985 film. It makes Lucy's eventual choice between the uppercrust bookworm Cecil Vyse (Laurence Fox, who does as much with an underwritten role as one could expect) less obvious and therefore more compelling.

Davies tries to make things more current with his treatment of the homosexuality of Lucy's vicar, Mr. Beebe (Mark Williams, better known as Arthur Weasley in the Potter films). Davies has crafted a scene in which the vicar becomes tongue-tied like a schoolgirl when he accompanies George and Lucy's impulsive younger brother, Freddy (Tom Stewart), on a trip to skinny-dipping in a pond.

In book and film, Beebe remains supportive of Lucy up to the point at which her relationship with George is revealed. Forster never fully fleshed out why Beebe turned against her, leaving Davies to suggest that Beebe may have also been in love with George.

I don't doubt that most Americans will prefer the 1985 film to this TV production. While the novel and the original film ended with the lovers optimistically facing a future in which the class lines that had previously separated them are irrelevant, the new adaptation takes a far more realistic look at the class issues. The 1922 coda shares a similar theme to last year's "Atonement," in which class and a war doom a relationship.

While many Americans seem oblivious or are purposely blind to class issues, one need only look at our current military deployments to see they still exist. While decisions to go to war are made much higher up the social ladder, it's the middle and lower classes that inevitably pay the costs, both in taxes and in lives lost.

Related Blog Posts
Tonight's TV: A Room With a View

From Watch with Intelligence

From the LA Times:

PBS offers a new version of the novelist's 'A Room With a View,' featuring Elaine Cassidy, on 'Masterpiece.'

Get ready for some sigh-worthy amore, British style. "Masterpiece" (KCET, tonight at 9) airs a new production, adapted by Andrew Davies, of the E.M. Forster classic "A Room With a View," which was last filmed in 1985 by James Ivory, starring Maggie Smith, Helena Bonham Carter and Judi Dench.
IWC Media photo by Sophie Molins
Elaine Cassidy is now Lucy Honeychurch, who arrives at an Italian guest house and is offered a room with a view by Mr. Emerson (Rafe Spall) and his eccentric son, George (Timothy Spall). We're pre- dicting air traffic to Florence will surely rise after it airs. 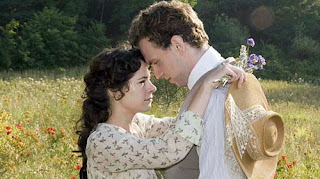 Email ThisBlogThis!Share to TwitterShare to FacebookShare to Pinterest
Labels: Room with a View