Rev. Churchill Gibson, Rest in Peace and Rise in Glory 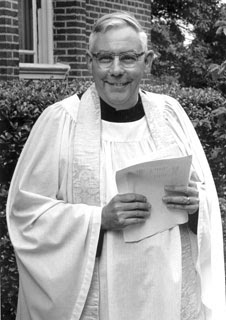 From the VTS Alumni Office:

Rev. Churchill J. Gibson, Jr. (1931-2008)
Virginia Theological Seminary mourns the death of the Rev. Churchill J. Gibson, Jr. (VTS ‘56), former chaplain at VTS and St. Stephen’s School. Churchill is the grandson of two bishops: Robert Atkinson Gibson (Bishop of Virginia, 1902-1919) and Arthur S. Lloyd (Bishop Coadjutor of Virginia, 1909-1910). His father was a much beloved rector of St. James's Church in Richmond for many years, his son Webster is the rector of Christ Church, Winchester, and Joe Pinder, VTS Development Officer for Communication Services, is Churchill's nephew.

Looking back, Churchill has joked that he spent most of his life on Seminary Road. He attended Episcopal High School and, following graduation from the University of Virginia, attended VTS where he earned an M.Div. in 1956. Later he served as chaplain at St. Stephen’s School from 1966 until he joined the VTS faculty in 1977. Concurrently, he served as a chaplain at the diocesan camp at Shrine Mont (1964-84) and as an assistant rector at Emmanuel on Russell Road (1962-95). Professor Tony Lewis remembers Churchill as his 10th grade English teacher and high school chaplain at St. Stephen’s. Many of Churchill’s former students look upon him as being one of the most influential people in their maturation, having treated them with respect, utter honesty, and complete integrity.

Earlier this year the Executive Committee of the Board of Trustees unanimously voted to confer upon Churchill Gibson, Seminary Chaplain from 1977 to 1996, the title of Professor Emeritus, as of February 28, 1996. The designation of Emeritus status was made in appreciation of and in thanksgiving for Churchill’s many years of service and many contributions to the Seminary Community.

Said the Rev. Bob Prichard, professor of Church History at Virginia Seminary, “It is Churchill’s wit and his deep and abiding concern for matters of social justice that people most admire and revere. Churchill Gibson could make and still does make the Christian enterprise believable and oh so much more delightful. According to Churchill, 95% of ministry is just showing up!”

The schedule of events celebrating Churchill Gibson’s life include:

• Saturday April 12, 11:00 a.m.: A memorial service in the Seminary Chapel at 11:00 a.m. followed by lunch in the Deanery. The Rt. Rev. Peter James Lee will preside at the service; the Rt. Rev. Ted Gulick will preach.

On this day, it is my duty to inform the Seminary Community and its friends of the death yesterday morning of the Rev. Churchill J. Gibson, Jr., a member of the Class of 1956 and Chaplain Emeritus of the Seminary. He was 77 years old.

Parish priest of the Diocese of Virginia, Chaplain at Saint Stephen's School and at Shrine Mont, the Virginia Diocesan camp, he served as a much loved Chaplain of the Seminary, shaping generations of students here at Virginia Theological Seminary. He was a wise and caring pastor who touched the lives of many students with his love of the Lord and his care of God's people.

He is survived by his wife Dorothy, his four children, and many other relatives and friends.

The funeral for the Reverend Churchill J. Gibson, Jr. will be held at the Seminary's chapel on Saturday April 12, 2008 at 11 a.m. followed by a reception, which will be held in the Deanery.

Please join me in keeping the Gibson family in your prayers and in giving thanks for Churchill's life and ministry.

May he rest in peace and rise in glory!

GIBSON CHURCHILL J. GIBSON, JR. On April 9, 2008 in his home. Survived by his wife Dorothy S. and children Churchill J. Gibson, IV of Alexandria, VA; Dorothy B. Gibson of Seattle, WA; Webster S. Gibson of Winchester, VA; and Gay L. Gibson of Mechanicsville, VA and ten grandchildren and his sisters, Susan Stuart Gibson Davenport of Prospect, KY and Gay Gibson Pinder of Melfa, VA. Family will receive family and friends on Friday, April 11 from 6 to 8 p.m. at Emmanuel Episcopal Church, 1608 Russell Rd, Alexandria, VA. Funeral service will be held at 11 a.m. Saturday, April 12 at the Virginia Theological Seminary, Alexandria, VA. Interment will be 11 a.m. Monday, April 14 at Hollywood Cemetery, Richmond, VA. In lieu of flowers contributions may be made to Shrine Mont, Orkney Springs, VA 22845 or a charity of choice.

Click here for an audio version of the service (.mp3)
- Allow time to load -

Letter from the Rt. Rev. Peter James Lee to the clergy and churches of the Diocese of Virginia:

To: Clergy and Churches of the Diocese of Virginia

From: The Office of the Bishop

The Rev. Churchill Jones Gibson Jr., priest of the Diocese of Virginia, died Wednesday, April 9 at his home in Alexandria. Mr. Gibson was born in Richmond in 1931. After graduating from the University of Virginia and Virginia Theological Seminary, Mr. Gibson was ordained to the diaconate in 1956 and to the priesthood in 1957 by Bishop Goodwin. His family has been an active one in the Diocese: his father, the Rev. Churchill Jones Gibson Sr., served as long-time rector at St. James's, Richmond, and his grandfather, the Rt. Rev. Robert Atkinson Gibson, was bishop coadjutor from 1897-1902 and diocesan bishop until 1919. His uncle and aunt, the Rev. Dr. Edmund Lee Woodward and Frances Gibson Woodward, founded Shrine Mont.

Mr. Gibson had a vital ministry in both parochial and institutional settings. He began his career in Richmond as deacon-in-charge at St. Martin's, Triangle in 1956. He went on to positions as priest-in-charge at St. Martin's; chaplain at St. Stephen's School, Alexandria; associate rector at Emmanuel, Alexandria; rector of Epiphany, Herndon; interim rector at St. John's, Arlington; and his most recent position as associate rector at St. Mark's, Alexandria. He served as chaplain of Virginia Theological Seminary from 1977-1995.

Mr. Gibson was devoted to youth ministry, and was the much-beloved chaplain to a generation of young Virginia Episcopalians. He served as chaplain of the Cathedral Shrine of the Transfiguration from 1964-1984 and continued his involvement in the life of Shrine Mont until shortly before his death. He played a central role in the formation of St. George's Camp and a number of other Shrine Mont camps and programs. Additionally, Mr. Gibson authored several youth oriented works, including Youth in Crisis; A Prayer Book Manual; Sexual Practice & Student Confusion; and The Spiritual Format of Adolescence in the Church Tradition.

Mr. Gibson and his wife, Dorothy "Dottie" Gibson, whom he married in 1957, had four children. Churchill "Kirk" J. Gibson IV, a member of Emmanuel, Alexandria, serves as an Annual Council delegate and Executive Board member. The Rev. Webster S. Gibson is rector of Christ Church, Winchester. Dorothy Gibson Webster lives in Seattle. Gay Gibson May lives in Mechanicsville and is a member of St. James's, Richmond.

A funeral will be held Saturday, April 12 at 11 a.m. at Virginia Seminary Chapel. Clergy are asked to vest and wear white stoles.

Thanks for this! Churchill had a large influence on my spiritual life. Heck, Churchill was the priest who married us!

He was the temporary rector at St. John's Episcopal Church in Arlington, Virginia, where my wife and I worshipped while we dated.

We have followed his battle with cancer over the last few months, and learned how a man of faith faces death with dignity and faith.

Thank you for posting the links to the recordings of the service for my Uncle Churchill. My mother is his wife Dorothy's older sister. She is nearly 85 and her health did not permit us to travel to Virginia to mourn and celebrate with our family. That she was able to see the Bishops' sermon was a blessing. Thank you again.

Better late than never I guess. I just ran across this post about the passing of Churchill Gibson. It made me so sad. He still is a great inspiration to me. Always wearing his black industrial-looking shoes...jumping off the desk to make a point...always ready with a smile, a hand on the shoulder and great advice.

I can never forget how he walked me out to the football bleachers a few days before graduation so we could be alone. He gave me a bunch of advice but ended by saying, "Be the best person you can be."
Those words and that moment have stayed with me for forty years.

My prayers for his family and all whom he touched.