My former professor, Dr. Diana Butler Bass, has another helpful discussion about the Rev. Jeremiah Wright. In this case, she reviews the recent appearances that Reverend Wright made on PBS and at the NAACP meeting in Detroit which was carried on CNN. Earlier on Friday I watched the McLoughlin Group in which at least two of the commentators recommended that Reverend Wright should not be speaking publicly, that it would hurt not only the Obama campaign, but also race relations in the U.S. I wondered about that assertion after hearing it, and after I watched and heard Reverend Wright in the PBS interview I came to the conclusion that we need to be listening to this person (critially, of course, but we should listen and not demonize!).

In the midst of the debate and the controversy, taking a good look at the whole breadth of Reverend Wright's preaching and speaking is important to do. That said, I do understand people's anger at hearing stark, angry and critical words about the United States.

Dr. Diana Butler Bass's article is posted over at Beliefnet in full... 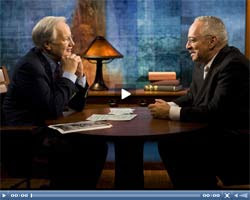 Over the last several days, I watched Rev. Jeremiah Wright in discussions of faith, theology, history, and culture on television. The three-plus hours I devoted to PBS and CNN amounted to some of the most sophisticated and thoughtful programming on American culture and racial issues that any news station has offered in recent years. And, for those who really listened to Rev. Wright, he moved from being a political liability in the current presidential campaign to demonstrating why he is one of the nation's most compelling spokespersons of the African-American community and of progressive Christianity.

On Friday, Bill Moyers interviewed Wright in an hour-long conversation. (Watch it here.) On Sunday, Wright preached at an NAACP fundraiser in Detroit that attracted 10,000 people. (Watch parts 1 [intro], 2, 3, 4, 5, and 6.) Finally, on Monday morning, Wright addressed a packed National Press Club in Washington, D.C. However different the venues, a surprisingly common thread wound through all three speeches -- that a realistic understanding of history forms the spiritual basis of hope and healing.

In the Moyers interview, Wright admitted that one of the major influences on his ministry was the august historian Martin E. Marty of the University of Chicago (a white Lutheran and a true gentleman scholar), who challenged his students to relate the "faith preached in our churches" to the "world in which our church members leave at the benediction." He then quoted African-American historian Carter G. Woodson, saying that black Americans had been—and one can argue, by inference, Anglo-Americans as well—"miseducated."

I suspect that both Woodson and Marty share the perception that Americans suffer from "miseducation" regarding history. This "miseducation" means looking to the glorious parts of history and not to its despair, of having an incomplete picture—only a "piece of the story"—regarding the past. Bad history leaves out the bits that make us cringe, doubt ourselves, or question our morality. Leaving out the uncomfortable parts may reinforce cherished views, but it lacks the power of internal critique or self-correction.

Realistic history includes the good and the amoral, the profound and the profane. It gives us the ability to understand the fullness of human experience and learn from mistakes and sin. A robust vision of the past, Wright stated, enables Christians "not to leave that world and pretend that we are now in some sort of fantasy land, as Martin Marty called it, but to serve a God who comes into history on the side of the oppressed."

The God of history is also, as Wright reminded his audience on Sunday, "a God of diversity." ...