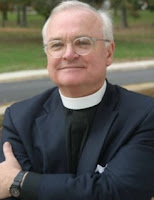 The Rev Dr. Barney Hawkins of the Center for Anglican Communion Studies at VTS reflects on his trip to the Sudan....

...I have posted it below, or you can read it HERE.

REFLECTIONS ON MY TRIP TO THE SUDAN

I returned from the Sudan on April 23. Since then, not one day has gone by that I have not thought about my visit and the people I met. I traveled to the Sudan for the enthronement service for the Most Rev. Daniel Deng Bul (VTS ’97) on Sunday, April 20. It was quite a journey: Washington to Amsterdam to Entebbe, Uganda. I spent one night in Kampala, Uganda and connected with the delegation from “815” and my former student and friend, the Rev. Robert Marshall. He represented the Diocese of Southwestern Virginia which has had a long companion diocese relationship with the Province of the Episcopal Church of the Sudan. On April 19 we departed for Juba, the capitol of the Southern Government of the Sudan.

From the moment we arrived in Juba, gracious hospitality was always present. On the day of our arrival, the Diocese hosted us for dinner on the grounds of the Cathedral. On the day of the enthronement service, there was hospitality all day long. The actual service lasted four hours, but no one was watching the clock. In the afternoon until the sun set, there were speeches and skits to honor the new Archbishop and his family. It was a festive and fun time. In the evening, the Most Rev. Daniel Deng Bul hosted all out of town guests for a dinner at a camp on the banks of the Nile. It was a long day, and a day to remember.

The Archbishop of Rwanda preached the sermon at the enthronement service. He and Daniel Deng Bul had studied at VTS at the same time. The Archbishop of Kenya in his charge to the new Archbishop warned: “If you want to go fast, go alone. If you want to go far, go with others.” Going with others as a leader has been the hallmark of Daniel Deng Bul’s significant ministry in the church and public square in the Sudan. He is a voice for the voiceless. He is a voice for peace in his troubled land. He is the voice of both reason and hope.

Last week there were incursions from Chad which threatened the government in Khartoum. Darfur rebel leader Khalil Ibrahim has promised to launch more attacks until the government of President Omar Hassan al-Bashir in Khartoum is brought down. There is a very fragile peace between Khartoum in the north and Juba in the south. By 2011 the peace agreement between Khartoum (Islam) and Juba (Christian) must be ratified. After hearing the President of the Southern Government and the Governor of the state of which Juba in the capitol, I am deeply concerned about the prospects for peace. Darfur adds another sad dimension to the story. It is a country divided by religion and material resources. It is a country ravaged by war and poverty. Such conditions do not make for easy conversation to resolve differences.

For one bright moment on April 20 at a joyful enthronement service, however, the Christian flock in Juba was full of hope about the future. The Most Rev. Daniel Deng Bul is a servant leader who follows closely the One who is the hope and promise of the Episcopal Church of the Sudan, Jesus Christ, the Lord and Savior of us all. I experienced Gospel hospitality during my brief time in the Sudan. This Gospel hospitality is an outward and visible sign of the hope which lives within the Sudanese people. The future of the Sudan is ultimately in God’s hands, the God of Peace and Justice whom we know in the Risen Lord.