Happy Fourth of July, some reading for those in a "lover's quarrel" with this country... 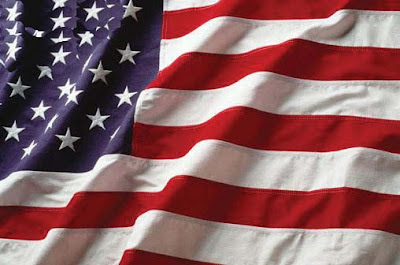 My friend JH has a tradition of reading the Declaration of Independence out loud to others on July 4th. As a former history teacher, former cub scout, political science major, and lover of this country I applaud this tradition. I offer a few other things to read today as we celebrate this great country, and also have what William Sloane Coffin described as "lover's quarrel" with our country. What Coffin was getting at was that we should love our country, love it fully, heartily, and passionately, though we should not let this love blind us, but that we should engage in a "lover's quarrel" with this great nation, by pointing out its failings, its sins, and its blind spots - not because we hate our country, but because we are committed to it and want it to be even better.

So, without further ado, a few items to read today ... if you are so inclined...and do offer up your suggestions for reading for those who are engaged in a "lover's quarrel" this great nation. 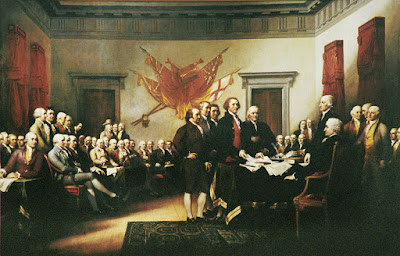 1) Declaration of Independence, excerpted below, read it in its entirety HERE:

IN CONGRESS, JULY 4, 1776
The unanimous Declaration of the thirteen united States of America

hen in the Course of human events it becomes necessary for one people to dissolve the political bands which have connected them with another and to assume among the powers of the earth, the separate and equal station to which the Laws of Nature and of Nature's God entitle them, a decent respect to the opinions of mankind requires that they should declare the causes which impel them to the separation.

We hold these truths to be self-evident, that all men are created equal, that they are endowed by their Creator with certain unalienable Rights, that among these are Life, Liberty and the pursuit of Happiness. — That to secure these rights, Governments are instituted among Men, deriving their just powers from the consent of the governed, — That whenever any Form of Government becomes destructive of these ends, it is the Right of the People to alter or to abolish it, and to institute new Government, laying its foundation on such principles and organizing its powers in such form, as to them shall seem most likely to effect their Safety and Happiness. Prudence, indeed, will dictate that Governments long established should not be changed for light and transient causes; and accordingly all experience hath shewn that mankind are more disposed to suffer, while evils are sufferable than to right themselves by abolishing the forms to which they are accustomed. But when a long train of abuses and usurpations, pursuing invariably the same Object evinces a design to reduce them under absolute Despotism, it is their right, it is their duty, to throw off such Government, and to provide new Guards for their future security... 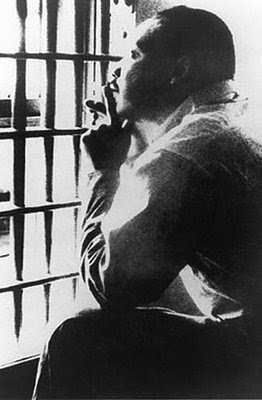 16 April 1963
My Dear Fellow Clergymen:
While confined here in the Birmingham city jail, I came across your recent statement calling my present activities "unwise and untimely." Seldom do I pause to answer criticism of my work and ideas. If I sought to answer all the criticisms that cross my desk, my secretaries would have little time for anything other than such correspondence in the course of the day, and I would have no time for constructive work. But since I feel that you are men of genuine good will and that your criticisms are sincerely set forth, I want to try to answer your statement in what I hope will be patient and reasonable terms.

I think I should indicate why I am here in Birmingham, since you have been influenced by the view which argues against "outsiders coming in." I have the honor of serving as president of the Southern Christian Leadership Conference, an organization operating in every southern state, with headquarters in Atlanta, Georgia. We have some eighty five affiliated organizations across the South, and one of them is the Alabama Christian Movement for Human Rights. Frequently we share staff, educational and financial resources with our affiliates. Several months ago the affiliate here in Birmingham asked us to be on call to engage in a nonviolent direct action program if such were deemed necessary. We readily consented, and when the hour came we lived up to our promise. So I, along with several members of my staff, am here because I was invited here. I am here because I have organizational ties here.

But more basically, I am in Birmingham because injustice is here. Just as the prophets of the eighth century B.C. left their villages and carried their "thus saith the Lord" far beyond the boundaries of their home towns, and just as the Apostle Paul left his village of Tarsus and carried the gospel of Jesus Christ to the far corners of the Greco Roman world, so am I compelled to carry the gospel of freedom beyond my own home town. Like Paul, I must constantly respond to the Macedonian call for aid.

With Ray Charles singing it!

O beautiful for pilgrim feet
Whose stern impassion'd stress
A thoroughfare for freedom beat
Across the wilderness.

O beautiful for heroes prov'd
In liberating strife,
Who more than self their country loved,
And mercy more than life.

America! America!
May God thy gold refine
Till all success be nobleness,
And ev'ry gain divine.

America! America!
God shed His grace on thee,
And crown thy good with brotherhood
From sea to shining sea. 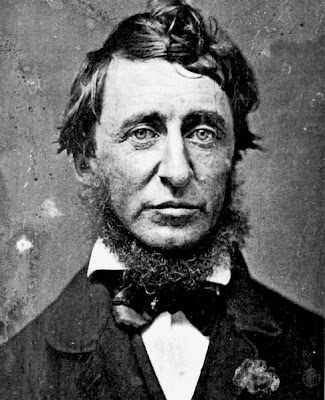 I HEARTILY ACCEPT the motto, — "That government is best which governs least";(1) and I should like to see it acted up to more rapidly and systematically. Carried out, it finally amounts to this, which also I believe, — "That government is best which governs not at all"; and when men are prepared for it, that will be the kind of government which they will have. Government is at best but an expedient; but most governments are usually, and all governments are sometimes, inexpedient. The objections which have been brought against a standing army, and they are many and weighty, and deserve to prevail, may also at last be brought against a standing government. The standing army is only an arm of the standing government. The government itself, which is only the mode which the people have chosen to execute their will, is equally liable to be abused and perverted before the people can act through it. Witness the present Mexican war,(2) the work of comparatively a few individuals using the standing government as their tool; for, in the outset, the people would not have consented to this measure. 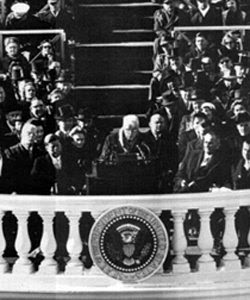 The land was ours before we were the land's.
She was our land more than a hundred years
Before we were her people. She was ours
In Massachusetts, in Virginia.
But we were England's, still colonials,
Possessing what we still were unpossessed by,
Possessed by what we now no more possessed.
Something we were withholding made us weak.
Until we found out that it was ourselves
We were withholding from our land of living,
And forthwith found salvation in surrender.
Such as we were we gave ourselves outright
(The deed of gift was many deeds of war)
To the land vaguely realizing westward,
But still unstoried, artless, unenhanced,
Such as she was, such as she would become.

...and then there are two from Abraham Lincoln...I just couldn't resist! 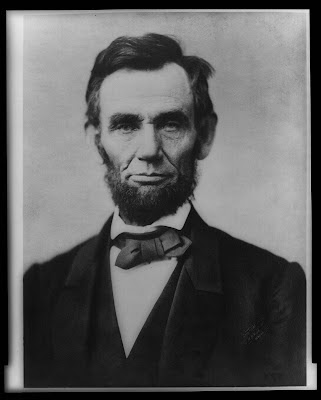 Four score and seven years ago our fathers brought forth on this continent, a new nation, conceived in Liberty, and dedicated to the proposition that all men are created equal.

Now we are engaged in a great civil war, testing whether that nation, or any nation so conceived and so dedicated, can long endure. We are met on a great battle-field of that war. We have come to dedicate a portion of that field, as a final resting place for those who here gave their lives that that nation might live. It is altogether fitting and proper that we should do this.

But, in a larger sense, we can not dedicate -- we can not consecrate -- we can not hallow -- this ground. The brave men, living and dead, who struggled here, have consecrated it, far above our poor power to add or detract. The world will little note, nor long remember what we say here, but it can never forget what they did here. It is for us the living, rather, to be dedicated here to the unfinished work which they who fought here have thus far so nobly advanced. It is rather for us to be here dedicated to the great task remaining before us -- that from these honored dead we take increased devotion to that cause for which they gave the last full measure of devotion -- that we here highly resolve that these dead shall not have died in vain -- that this nation, under God, shall have a new birth of freedom -- and that government of the people, by the people, for the people, shall not perish from the earth.

8) Lincoln's First Inaugural (below is a sample):