I, for one, am psyched to tune in and see Lance compete in the 2009 Tour de France!
Confirmed tonight by the New York Times:

After more than three years out of professional cycling, Lance Armstrong — the cancer survivor and seven-time Tour de France winner — announced Tuesday that he would emerge from retirement and climb back onto his bike.

Armstrong, who will turn 37 next week, briefly spoke about his decision in a videotaped statement posted on his foundation’s Web site.

“Hey everybody, I know there’s been a lot of reports in the media today about a possible return to racing,” he said. “Just want to let you know that after long talks with my kids, the rest of my family, a close group of friends, I have decided to return to professional cycling in 2009.”

Armstrong provided few details, but he said he was making the comeback to begin an international cancer strategy. He did not return telephone messages, but in an e-mail statement he said his return would “raise awareness of the global cancer burden.”

Armstrong, who retired from racing after winning the 2005 Tour de France, said he would discuss his plans during an appearance at the Clinton Global Initiative on Sept. 24 in New York.

News of Armstrong’s return made its way through cycling circles in minutes. Steve Johnson, the chief executive of USA Cycling, said Armstrong’s comeback would be a boon for the sport.

“Lance did so much to put the sport on the radar screen and, to me, I think heroes and role models are big in sports development,” Johnson said. “I think a lot of people will tune in, just out of curiosity alone.”

“His ability to focus the world on other issues is a powerful tool,” Stapleton said from the Tour of Missouri. “I hope this is part of a bigger story than just winning another Tour.”

Stapleton cautioned that Armstrong’s return would not necessarily be well received by all within the cycling community. While Armstrong’s career was filled with amazing achievements, it was not without its clouds. As a rider, he was dogged by doping allegations.

“He can be polarizing,” Stapleton said. “There may be a different view in Europe about this than in the United States. It’s a provocative issue.”

Still, Stapleton said he had no doubts about Armstrong’s ability to return as a competitive rider.

“It’s quite a different dynamic; he’s going to take the sport by its nose,” Stapleton said. “He’s dealing the cards right now.”

Armstrong may not be the oldest rider in next year’s Tour de France — if he competes in the race — but he will be beyond the typical age for an elite cyclist. An eighth victory would make him the oldest winner of the Tour. Firmin Lambot, a Belgian, won in 1922 at age 36, according to the Tour’s official history.

But first, Armstrong must find a team. Even the most talented cyclist cannot win on his own. Teammates provide shelter from the wind, chase down opponents and free the sport’s stars from mundane, energy-sapping tasks such as picking up water bottles from a team car. 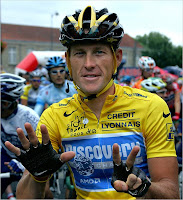 The speculation has focused on the Astana team because of Armstrong’s close connections to the team. Johan Bruyneel, whose holding company owns the team, was selected by Armstrong to direct the United States Postal Service team when Armstrong made his return to racing after his cancer treatment in 1999. As a team director, Bruyneel was part of all of Armstrong’s Tour de France wins.

Astana, though, is not guaranteed a berth in next year’s Tour. The team was excluded from this year’s race by the organizers because of doubts about the team’s willingness to root out doping.

Philippe Maertens, a spokesman for Astana, said the team was unaware of Armstrong’s announcement. He added that Bruyneel had been trying to reach Armstrong since Monday.

“O.K., you’ve surprised me,” Maertens said. “But I’m not surprised about what Armstrong says about making a comeback.”

Stapleton suggested that Astana’s surprise about the announced was feigned.

“I don’t think this is a rash action,” he said of the announcement. “It’s hard to believe that Astana is not the choice. If you announce something in an article like this, most of it must be worked out.”

In an article published Tuesday on the Web site of Vanity Fair magazine, Armstrong discussed his comeback. He said he would contact President Nicolas Sarkozy of France to plead his case if the Amaury Sport Organization, which owns the Tour de France, did not allow his team to enter that race.

Armstrong said the Olympic triumphs of older athletes like the 41-year-old swimmer Dara Torres inspired him to make his comeback.

Torres, who won three silver medals at the Beijing Games — her fifth Olympics — said she felt honored to have played a part in Armstrong’s decision.

“He’s young, only 37; that’s just a baby,” Torres said. “I’m sure he’s going to surround himself with the best people to be successful.”

Armstrong told Vanity Fair that he wanted to prove that he was competing without performance-enhancing drugs, mentioning that he would have a “comprehensive program” that would mean “there will be no way to cheat.”

from the New York Times

Here's a video of him training for his last Tour...

I'm conflicted about le Lance's return. On the one hand, he's a great athlete who is a joy to watch. On the other hand, this year's Tour was the best one in a long time because the field was wide open--there was no Patron to rule the race. There's also an odd symmetry to the fact that Tyler Hamilton just won the US Championship Road race and that Floyd Landis will ride for the next evolution of HealthNet/Maxxis next year. All these old postal riders make me nervous--there is a cloud of suspicion over all of them. Oh, and don't get me started on whether or not Lance is being paid beaucoup bucks by Astana to insure their invitation to Le Tour next year.

All that being said, if Lance does come back he might just save the Tour de Georgia which is rumored to be on the verge of cancellation without a major sponsor. If Lance would ride Georgia, the corporations would come running.