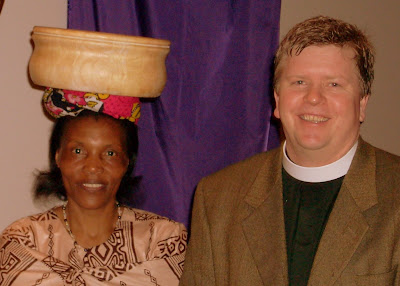 Dr. Esther Mombo & me (in snazzy clerical gear!)
While I was in seminary, I waited until the absolute last minute to buy clergy shirts and other clerical "accessories," one reason was that I didn't have much extra cash after buying several hundred books. Another, eason was that I didn't wan to jinx my ordination process. I know it sounds silly, but I didn't want to have a bunch of clergy shirts in the closet when I had yet to actually be approved for ordination. The third reason was that I tried to find clergy wear, and vestments that were produced in a "Fair Trade" way. I felt that if I was leading worship, then the clothing that signifies this leadership should not be contributing to oppression or environmental destruction. I did some searching around for "Fair Trade" vestments and clerical "gear" and had a hard time finding any, even after contacting a wide variety of clergy who I thought would be like-minded.

I was very interested when the following article popped up today in my news-feed, from the Anglican Communion News Service. Pretty cool, I hope this may influence the "big names" in the clerical clothing and vestment business as well!

From the Anglican Communion News Service

Nottingham-based clergyman, Simon Butler is launching his very own brand of fairly traded clergy shirts – after spotting a gap in the market.

Curate at St Giles Church, West Bridgford, the Revd Simon Butler believes his new company, Butler & Butler, set up in partnership with his father Richard will be the first business to offer Fair Trade clerical shirts.

Simon said: “Very few clergy men and women would dispute the importance of Fair Trade in guaranteeing producers from developing countries a fair price for their goods and labour. Thankfully there are ever increasing numbers of Fair Trade products available to buy off the shelf. Until now however, buying a Fair Trade Clerical Shirt has not been an option.”

This is set to change with the launch of Fair Trade Clergy Shirts by Butler & Butler; for the very first time clergy will be able to choose Fair Trade when it comes to their shirts.

Simon explained: “Almost all of my colleagues seem to be committed to Fair Trade as an essential aspect of living the Gospel message, and so it seemed ridiculous that clergy didn’t have the option to buy according to conscience when it came to our own uniform!”

Butler & Butler shirts are made from 100% Fairtrade certified cotton, rather than the usual poly-cotton mix, and are produced in a Fairtrade certified factory. This ensures that no workers are exploited in the production process, that long term relationships with suppliers are guaranteed, and some of the world’s poorest producers are given the opportunity to work themselves out of poverty.

With a large number of the first batch sold before they have arrived in the country, Butler & Butler are inviting clergy to pre-order on their website www.fairtradeclergyshirts.co.uk

Shirts are also available to purchase from the following retailers from Mid November:

Item from: Diocese of Southwell & Nottingham