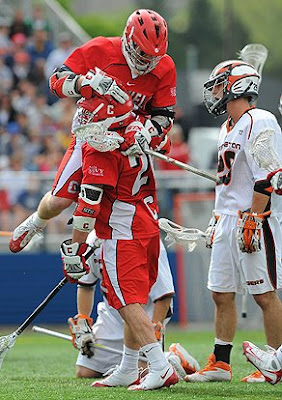 HEMPSTEAD, N.Y. (AP) — Cornell beat Princeton 6-4 in men's lacrosse Saturday to reach the semifinals of the NCAA tournament for the second time in three years.

Rocco Romero scored twice and Rob Pannell had three assists for Cornell in the quarterfinal at the Hofstra campus.

Cornell will next play May 23 in Foxborough, Mass., against the winner of Sunday's quarterfinal in Annapolis, Md., between Virginia and Johns Hopkins.

Cornell jumped ahead 5-1 at halftime and improved its record to 12-3. Tommy Davis and Chris McBride scored to draw Princeton within two goals entering the last quarter. Princeton, the Ivy League co-champion, finished at 13-3.

This was the 70th lacrosse meeting between Cornell and Princeton but the first in NCAA tournament play.

Ok, what's Lacrosse? I am a western boy. This is new to me. Never seen it. Is this something like soccer with funny racquets? Basketball without hoops? Ice hockey without ice? Football without pads? Why are they carrying around net thingys? I'm just askin'