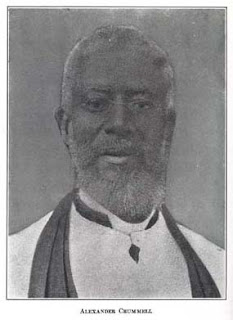 Almighty and everlasting God, we thank you for your servant Alexander Crummell, whom you called to preach the Gospel to those who were far off and to those who were near. Raise up in this and every land evangelists and heralds of your kingdom, that your Church may proclaim the unsearchable riches of our Savior Jesus Christ, who lives and reigns with you and the Holy Spirit, one God, now and for ever. Amen.


Read more at the Episcopal Cafe:

"I can see his face still, dark and heavy-lined beneath his snowy hair; lighting and shading, now with inspiration for the future, now in innocent pain at some human wickedness, now with sorrow at some hard memory from the past. The more I met Alexander Crummell, the more I felt how much that world was losing which knew so little of him. In another age he might have sat among the elders of the land in purple-bordered toga; in another country mothers might have sung him to the cradles.

He did his work,--he did it nobly and well; and yet I sorrow that here he worked alone, with so little human sympathy. His name to-day, in this broad land, means little, and comes to fifty million ears laden with no incense of memory or emulation. And herein lies the tragedy of the age: not that men are poor,--all men know something of poverty; not that men are wicked,--who is good? not that men are ignorant,-- what is Truth? Nay, but that men know so little of men."

And, at Padre Mickey:

"Today is the feast of Alexander Crummell. He was an African-American and fought racism all of his life. He was born on March 3, 1819, in New York City. His father, Boston Crummell, was a former slave, while his mother, Charity Hicks, was a freeborn black woman. Both of his parents were very active in the Abolition Movement, and the first black newspaper, Freedom’s Journal, was published in their home. Their values guided him throughout his life. His father told him stories of his life back in Africa before he was captured, and these stories created a sense of unity with the people in Africa, as well as with those of African heritage in the Americas and throughout the world. He was also educated in Abolitionism by working with the American Anti-Slavery Society in New York during his youth. He was an intelligent person and one who wouldn’t take “no” for an answer. His tenacity and perseverance were important parts of his personality and were instrumental in his success."
Posted by Peter Carey on Thursday, September 10, 2009