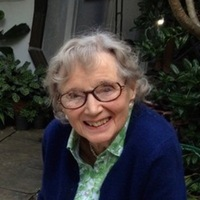 On May 16, 2020, Elinor Robinson Greene, age 97, died peacefully at Cathedral Village. Named after her grandmother, Elinor Cooke, Cookie was born in Hartford, Connecticut in a house on Nook Farm - a stop on the Underground Railroad. She grew up there with sisters, Gussie, Amy and Anne; mother, Augusta James McLane Robinson (from Baltimore); father, Lucius Franklin Robinson, Jr.; and Lu’s parents next door. She attended the school her father went to - Miss Wheeler’s - which was a one-room schoolhouse where classes were held outside on the porch all year long! Her summers were spent on Fulling Mill Farm in East Hampton, Long Island, tight-rope walking on the fences and jumping in the silo.

After graduating from Chatham Hall in Virginia in 1939, Cookie went to secretarial school, then to New York to work for Steuben Glass Company. When war broke out, she returned to Hartford where she drove a bus for Pratt & Whitney Aircraft Company. On evenings and weekends, she volunteered as a Nurse’s Aide at the Hartford Hospital and Bradley Field Air Force Base. While working at Pratt & Whitney, she was discovered by LTJG George Shaw Greene, Jr. who took her canoeing on the Housatonic and immediately fell head over heels in love with her!

Two years later they were married in East Hampton while George was on a brief shore leave. They then took the train to San Francisco where Cookie stayed while George went back overseas on the aircraft carrier U.S.S. Bataan. Upon his return, they moved to Memphis where Cookie worked for the Ration Board and George, on a new Naval assignment, taught aeronautical engineering. Soon after the arrival of the first of their four daughters, they moved to Sea Island, Georgia - then a quiet undiscovered island - where they built the first house on the marsh and where George worked at the Cloister Hotel. After the birth of their second daughter, finding the resort-life not really their cup of tea, they decided to move north, to Philadelphia, home of George’s aunt and uncle, Lilah and Ted Thayer, who were also great friends of Cookie’s parents.

Upon moving to this area, Cookie joined the Fortnightly Club. An active reader and lover of poetry all her life, she remained committed to the reading club that had introduced her to so many great friends in Philadelphia.

Cookie was a lifelong volunteer. She became an active member of the Garden Club of Philadelphia, where, for over sixty years she served in every capacity including as Chairman of the Philadelphia Committee of the Garden Club of America (GCA). She was an expert flower arranger securing numerous awards throughout her life and, until well into her 80s, she successfully competed in the Pennsylvania Horticultural Society’s annual spring Flower Show. She taught flower arranging and was also a GCA judge. Current members tell us that Cookie was responsible for the creation of the jewelry category of dried flower/plant design which has become a standard exhibit in the Flower Show.

Active also at St. Martin's in the Field for sixty years, Cookie was on the Altar Guild, taught flower arrangement, ran community drives, taught Sunday School and regularly attended adult education classes. Her children can relate stories of her participation as Class Mom, knitting instructor and homeroom supervisor at Springside. On the Women’s Committee of the Pennsylvania School for the Deaf, she taught art as a volunteer at the school for many years. She served on numerous community boards including the Wissahickon Valley Watershed Association and Planned Parenthood of Southeastern Pennsylvania. One of her favorite activities was teaching conservation and ecology courses designed for 4th, 5th, and 6th grades in the GCA- sponsored “TREND* Program” at the Schuylkill Valley Nature Center. (*TREND: Teaching Response to Environmental Demands). For this nearly twenty-year program she wrote scripts, designed visual aids and taught classes in many Philadelphia and suburban schools, including taking these children on field trips to the nature center.

Along with George, Cookie was admired for her unwavering devotion to their daughter, Reverend Nellie Greene, who at age 18 became severely and progressively physically disabled after a catastrophic automobile accident. For 46 years, Cookie helped Nellie with all of her physical and professional needs. She created books on tape for Nellie's college and graduate school research, and assisted with editing Nellie's essays as Nellie’s sight was so poor. She took Nellie everywhere she needed to go (including on vacations in and out of the country), set up support networks for her so that Nellie was able to succeed at Hampshire College, Yale Divinity School, and the Philadelphia School for the Diaconate, and ultimately was able to be ordained as an Episcopal Deacon in 1993 and serve as an Assistant Pastor at the then Chestnut Hill United Methodist Church for 23 years. After George's death in 2002, Cookie continued in this dedication to the end of Nellie's life remaining her steadfast caregiver and advocate for the “other abled.”

Wife, mother, grandmother, gardener, horticulturalist, pianist, artist, birdwatcher, avid reader, knitter and needle-pointer, canoeist and sailor, bridge player, teacher, traveler, loyal Phillies fan – you name it – Cookie lived life to the fullest. When the music started, she was the first on the dance floor! She embroidered, made clothes for her children, knitted sweaters for all, played tennis and golf. She especially loved to stroll along the beach bird watching and looking for shells. Always intellectually curious, she was a lifelong explorer learning about the cultural as well as the natural history of every place she visited and read about. In her twenty years residing at Cathedral Village, she participated enthusiastically on committees, attended courses, joined others for bridge, played the piano in the CV piano group, even planned and arranged flowers for the 2020 Leap Year Nonagenarian Party!

Cookie radiated sunshine! She loved life, made friends wherever she went, loved them all and was loved in return!

She is survived by her 3 daughters (Nancy, Alyn, and Lilah), 2 sons-in-law, 5 grandchildren and 5 great-grandchildren. A celebration of Cookie’s life will be held at a later date. In lieu of flowers, donations can be made to the National Audubon Society, Planned Parenthood of SE PA, or to a charity of the donor’s choice.