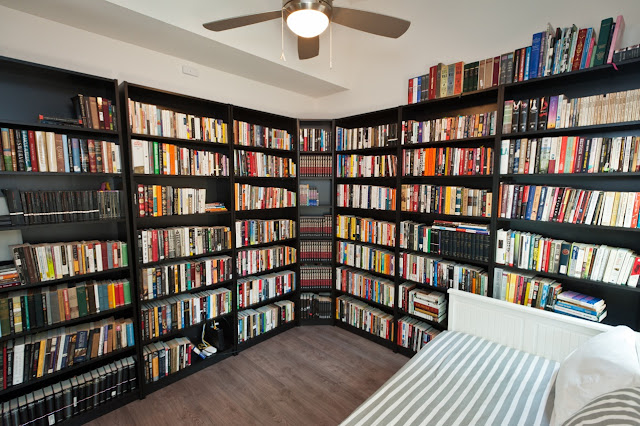 Why do we read? It's to escape, a little, of course. The stillness of quiet time with a book is unlike any other. We read to learn as well, obviously. But what are we trying to learn? Facts and figures? To impress people? To get better at our jobs? Maybe a little, if we're being honest. For the Stoics, the main reason to read was simple: To become a better person. To turn the words, into works. There are unprecedented, challenging times. Which is why you must be reading. It's just as essential, however, that you apply this reading to your duties as a citizen, a parent, a fellow human being. And as my friend Coach Raveling said, you owe it to the people who fought and died over the centuries—in the fights for freedom, fights against slavery and discrimination—so that we could all have access to books and information—we owe it to them to read. It’s a moral duty to search for truth and live by it.

We talked the last couple months about the costs of "functional illiteracy." It is not just incompetence. The cost of not reading widely, of not benefiting from experiences or perspectives outside your own, of not studying greats of history is also a kind of moral bankruptcy. An inability to know what the right thing is amidst noise and temptation. We read for clarity. We read to be inspired. We read to be called to a higher purpose. This is more urgent now than ever. So please keep reading… and I hope some of the books below can be of use to you.

Invisible Man by Ralph Ellison
It had been my intention to re-read this book and recent events only confirmed the need. Invisible Man has some of my favorite lines in fiction—"Play the game, boy, but raise the ante," "How does it feel to be free of illusion? Painful and empty"—which I have featured in my writing since I first read it over a decade ago. But reading this book, first published in 1952, in light of the killings of Ahmaud Arbery, Breonna Taylor and George Floyd was terribly sad. How little has changed. How callous and awful people are to each other. How crushing it must be to live in a world that strips you of your dignity, that uses you, that subjects you to violence and unfairness. There were many scenes I forgot in the book: A police killing. A race riot. Communist agitators exploiting the race issue. All of which take on more meaning now. There are many "anti-racist" reading lists floating around, but how many of the books on those lists will still be readable in 70 years? Do yourself a favor and read this. It's not going anywhere because it is timeless and sadly, very timely. Its conclusion is the most important thing: "We are to affirm the principle on which the country was built and not the men, or at least not the men who did the violence… the principle which they themselves had dreamed into being out of the chaos and the darkness of the feudal past, and which they had violated and compromised to the point of absurdity even in their own corrupt minds."

Gates of Fire by Steven Pressfield
According to Amazon, I bought this book on Oct 7, 2006. It cost $7.99 and I paid $3.99 for shipping because Amazon Prime was not around yet. I loved this book when I read it then, but I appreciate it so much more now. All I remembered, really, was that it was the story of the 300 Spartans. Now, all these years later, I am blown away at all the other things that Steven was doing in the book. The meta-narrative of the dying Spartan telling his story to the Persian court. The story of an orphan trying to find his family and his home. The triumph of courage over fear. The way that male and female energy come together to create some type of a whole. There's just so many different messages and plots going on in this book. It really is a masterwork and deserves all the accolades and fans it has earned over the years. If you haven't read it yet, you should. If you have, read it again. Also I think Steven's post about how Spartans would respond to COVID-19 is worth reading.

The Road by Cormac McCarthy
I joked a couple months ago that I was deliberately not reading this book because of the Pandemic. In truth, I got it down from my shelf and sat on my bedside table while I worked up the courage to read it again. My fear was well-founded, because on the night I finished, all I could do was walk quietly into my son's room and sob while he slept. The Road is just one of the most beautiful and profound depictions of struggle and sacrifice and love ever put down on the page. I hope in three thousand years, when our society is as distant to future generations as the Spartans are to us, that this book survives. Because it may just be one of the best things the human species has ever done.

Bonhoeffer: Pastor, Martyr, Prophet, Spy by Eric Metaxas
This is also a timely and important book—a first-time read for me but one I'm very glad I did. I saw a great sign at one of the protests: "What would you have done during slavery, Hitler or segregation? You're doing it right now." Bonhoeffer is a pastor who stood up to Hitler when almost all of Europe failed to; in fact, he stood up and gave his life when the rest of his countrymen believed in Hitler. Bonhoeffer was rich. He had easy escape routes to London and America. But he stayed and fought. He did not betray his faith. He lived it. And he was very nearly successful in ridding the world of a great evil. It's an incredible story and very much worth reading. (I will say it's hard for me to wrap my head around the fact that the author of this great book is also the author of the children's books Donald Builds the Wall and Donald Drains the Swamp.)

Great Contemporaries: Churchill Reflects on FDR, Hitler, Kipling, Chaplin, Balfour, and Other Giants of His Age by Winston Churchill
Last month I read Nixon's stab at this genre, but of course, Nixon was no Churchill. There are some sentences in this book that just… wow. Churchill remarks of T.E Lawrence that if that man had just been a writer, that would have been accomplishment enough. The same is true of Churchill. His observations here on Hitler, on FDR, on Shaw, are just brilliant. Of course, a bunch of the figures have drifted into obscurity but the portraits are still quite good.

Misc
As a family, we read The Three Questions which is a great kids book based on a Tolstoy story. We've also been reading the little series of Picture Book Biographies—particularly Lincoln, Hellen Keller, Lou Gerhig, Rosa Parks, Anne Frank, etc. Myself, I read The Old Man and the Sea from Hemingway which I quite liked. I really got a lot out of reading Ben Hardy’s new book, Personality Isn't Permanent: Break Free from Self-Limiting Beliefs and Rewrite Your Story, which comes out this Tuesday. I read Margaret Thatcher's autobiography which had some good parts—particularly the Falklands War—but also had way too much political minutiae that just seem insignificant years later. I watched Alison Klaymon's documentary The Brink, which profiles Steve Bannon… a generally awful human being who is largely responsible for the mess we are in right now. But it's good to study how bad people do what they do and the weaknesses in us that they exploit. I enjoyed the Lance Armstrong documentary on ESPN a lot as well. This piece from me on caring about injustice is something I am proud of, and I also re-published this chapter from Stillness Is the Key which I think is relevant right now.

This month's sponsor is Daily Stoic's Read to Lead course, which of course, I am a big fan of. Reading is a skill, like any skill, and to master it takes practice and skill and commitment. As I said earlier, we are reading for life and so we have to approach it with seriousness and respect. What we did with this course is take some of the best insights from the Stoics, from my own practice and from the lessons of great readers and thinkers throughout history and build them into a series of challenges that will make you a better reader (and get more out of what you read, remember more of what you read, and find great stuff to read). Also Daily Stoic has a new course about dealing with stress and anxiety which I think you'll like.

With that, I hope that you'll get around to reading whichever of these books catch your eye and that you'll learn as much as I did. Whether you buy them on Amazon today, or at an independent bookstore six months from now makes no difference to me. I just hope you read!

You're welcome to email me questions or raise issues for discussion. Better yet, if you know of a good book on a related topic, please pass it along. And as always, if one of these books comes to mean something to you, recommend it to someone else.

I promised myself a long time ago that if I saw a book that interested me I'd never let time or money or anything else prevent me from having it. This means that I treat reading with a certain amount of respect. All I ask, if you decide to email me back, is that you're not just thinking aloud.

Enjoy these books, treat your education like the job that it is, and let me know if you ever need anything.

If this email was forwarded to you and you'd like to sign up, just click here or email me at ryan.holiday@gmail.com with "Reading Newsletter" in the subject line.