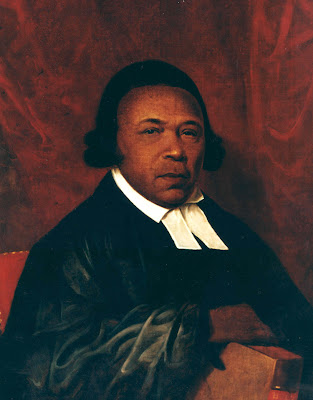 Absalom Jones was America’s first black priest. Born into slavery in Delaware at a time when slavery was being debated as immoral and undemocratic, he taught himself to read, using the New Testament as one of his resources. At the age of 16, Jones was sold to a shopkeeper in Philadelphia where he attended a night school for blacks, operated by Quakers. Following the purchase of his own freedom in 1784, Jones served as lay minister for the black membership at St. George’s Methodist Episcopal Church.
The active evangelism of Jones and that of his friend, Richard Allen, greatly increased black membership at St. George’s. Alarmed by the rise in black attendance, the vestry decided to segregate blacks into an upstairs gallery without notice. When ushers attempted to remove the black congregants, the resentful group exited the church. This exodus triggered the establishment of the Free African Society by Jones and Allen in 1787 to aid in the emancipation of slaves and to offer sustenance and spiritual support to widows, orphans, and the poor.
1794 Jones and Allen, with the assistance of local Quakers and Episcopalians, established the “First African Church” in Philadelphia. Shortly after the establishment that same year, the African Church applied to join the Protestant Episcopal Church, laying before the diocese three requirements: the Church must be received as an already organized body; it must have control over it’s own affairs; and Jones must be licensed as lay-reader and if qualified, ordained as its minister.

Upon acceptance into the Diocese of Pennsylvania, the church was renamed the African Episcopal Church of St. Thomas. The following year Jones became a deacon but was not ordained a priest until 1804, nine years later. At 58 years old, he became the first black American priest. He continued to be a leader in his community, founding a day school (as blacks were excluded from attending public school), the Female Benevolent Society, and an African Friendly Society. In 1800 he called upon Congress to abolish the slave trade and to provide for gradual emancipation of existing slaves. Jones died in 1818.
Posted by Peter Carey on Sunday, February 13, 2011