Have you heard about the Episcopal Service Corps?

You should check out these programs for young adults, in their 20s (and sometimes 30s)...the website: http://www.episcopalservicecorps.org/ and here is the Facebook page for the Episcopal Service Corps: https://www.facebook.com/group.php?gid=44485742871&ref=ts

In my opinion, there should be several in every diocese of the Episcopal Church!

Below are images from and old school brochure of the program that I was a part of back in the early 90s.  And below them is an article I wrote about my experience in the Cathedral Volunteer Service Community,  founded back in 1984. 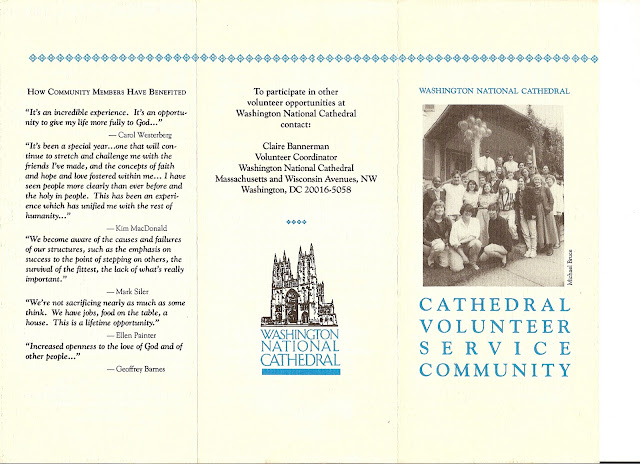 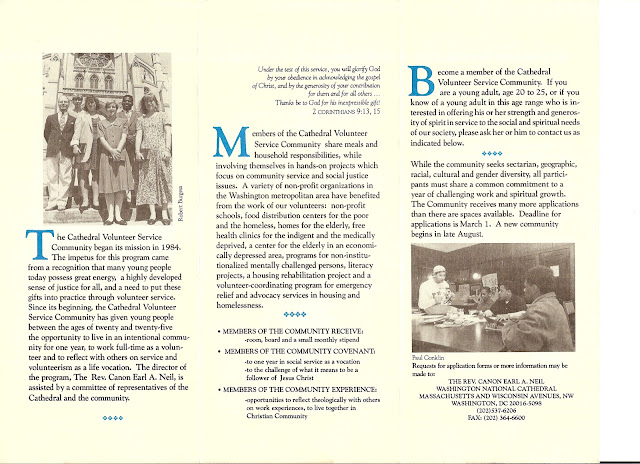 
Hope amidst the mess

In the midst of Episcopal Church news that includes court decisions in Virginia, inhibition of bishops, and disagreements in many congregations one might be forgiven for thinking that our church is rapidly swirling down the toilet bowl.
News Flash: It ain’t!

We don’t have too look far to see the bright spots in our church. Check out the growing network of Episcopal Internship Communities across the United States. For several decades, churches and dioceses have sponsored small groups (4-8) of young adults (18-30 years old or so) who live in community and each member works at a social service agency. There are slightly different guidelines and practices between these groups, but together they are sending thoughtful, prayerful, and dedicated young people into the Church and the world.

In 1992-1993, I had the good luck to join a community that was administered by the National Cathedral in Washington, DC. At the time, the “Cathedral Volunteer Service Community” was made up of six young adults from around the country. We hailed from Texas, North Carolina, Connecticut, Ohio and Vermont and came to the community from a variety of religious and political perspectives. We were lucky enough to have as our leader and mentor the Rev. Carole Crumley, who was then a canon of the National Cathedral (and is now a leader at the Shalem Institute for Spiritual Formation). The CVSC was grounded in a Rule of Life that had echoes of Benedictine Spirituality. We pledged to live in intentional Christian Community, praying together daily, sharing in the work of the household, meeting once a week for theological reflection with Canon Crumley, and also pledged to live a life of simplicity. In this case, simplicity meant (in part) that we each only received $100 a month for food (which we pooled to shop for the six of us) and $100 for other expenses. That was simple living!

We were challenged to feed and entertain six people on $600 a month. We were also challenged find ways to build community across our various theological and political differences, and it was not always easy. To top it off, five of us were first-born children in our family of origin! (We had some strong personalities to manage.) Outside of our house, I had the great fortune of spending a year working at the Samaritan Ministry of Greater Washington (SMGW) where I offered employment counseling to those who were homeless or at risk of being homeless. Really, I didn’t know anything about finding work (as I never really had a job before!), but I encountered people who were decidedly different than me, and while I don’t know how much help I gave, I certainly learned a great deal.
The six people in my community followed a variety of paths after leaving the community. One became a priest within a few years after our program, two others became teachers, another worked in business and then decided to follow his heart and now does work with cancer patients, another does peace and justice advocacy with another denomination.

While the Cathedral Volunteer Service Community is no longer in existence, there are several other Episcopal Internship Communities that are thriving and growing. Trinity Episcopal Church in DC now offers a program in our nation’s capital. The Rev. Jason Cox, who is a friend of mine from seminary, administers the program in the Diocese of Los Angeles (Episcopal Urban Internship Program). There are several other communities which are offering young people a way to practice their faith by working for those in need, living in intentional community, and integrating this work and community-living into their theological views and spiritual practices. This is good news indeed! It also counters the long-standing assumption that people in their twenties and thirties will leave the church and will return only when they decide to have a family.

Some Episcopal Internship Communities are sponsored by parishes, others by groups of parishes, and others by dioceses. Not only are these wonderful opportunities for young people, they are also tangible signs that our church is doing good things in the world, and that the work is connected to our belief in Jesus Christ, our hope in the Resurrection and our call to live lives of hope and compassion.

As a new priest, I am often asked: “Does the church have anything to say to the world?” It certainly does! One of the best ways to “say something to the world” is to show the world what we’re doing. These programs say that our church is engaged with the world and is developing dedicated disciples.

Can we do more? Certainly.

Can we encourage even more of these programs to develop? Absolutely.
Is our church about more than legal battles, inhibitions, schism, and disagreements? You bet!