Rowan in the News from "Lesley's Blog" 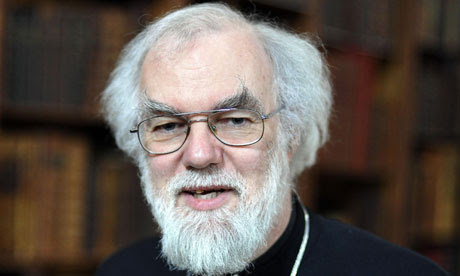 General Synod is meeting in York at the moment, debating how we can get growth in numbers and spiritual growth. You can hear Rowan’s presidential address here and read ithere.
The Twitter response was mostly positive, picking up on some of the sound bites:

Christianity is not advice but news – don’t reduce to exhalation or sound moral/spiritual teaching alone but reintroduce resurrection news of vindication, homecoming & transformation alarmingly beyond expectation. God has not abandoned us.
Knowing the God who has not abandoned us is inseparable from us not abandoning those whom God has called us to serve.
Mission is asking people to walk with us as we walk with Jesus.
Keeping faith is not the same as never changing.

However, there was disappointment that this seemed very focussed on the clergy once again with little acknowledgement of lay leadership.
Then there is a very interesting interview in the Guardian by the playwright David Hare. Some beautiful quotes:

I say that’s all very well, but how then can he be so critical of self-absorption when he himself is a poet? Surely self-study is necessary to create art? “Ah, yes, two very different things. Self-absorption means thinking the most interesting thing in the world is myself. Self-scrutiny, on the other hand, is very deeply part of the Christian experience.” So is hisreligion a relief, a way of escaping self? “Yes. We are able to lay down the heavy burden of self-justification. Put it this way, if I’m not absolutely paralysed by the question, ‘Am I right? Am I safe?’ then there are more things I can ask of myself. I can afford to be wrong. In my middle 20s, I was an angst-ridden young man, with a lot of worries about whether I was doing enough suffering and whether I was compassionate enough. But the late, great Mother Mary Clare said to me, ‘You don’t have to suffer for the sins of the world, darling. It’s been done.’”

The most intriguing bit in the interview is this:

If you could change one thing about the church? “Rethink the General Synod.”

Then Rowan at his best, again reported in the Guardian, during a visit to Grendon prison:

How do you get to be Archbishop of Canterbury? “By being very wicked in a previous life.”
Asked by a prisoner whether he regretted any of the things he had said in public, he replied immediately: “How long have you got?”

Of all the various layers of his job, the only two he spoke of with real passion were his responsibilities in east Kent, and his visits to suffering and persecuted churches abroad. Perhaps a room full of repentant murderers has a more wholesome atmosphere than a committee of ecclesiastical politicians all convinced of their own righteousness. In any case, at Grendon he was witty, straightforward, and humble in a way I have never seen him in public before. Even if he has no more power in government than he has over his own church, his visit did what good he could. No wonder he believes in localism.