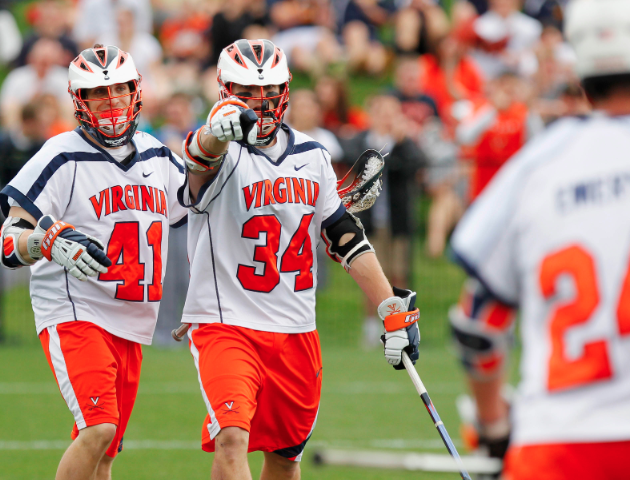 CHAPEL HILL, N.C. - Nine different Cavaliers scored at least one goal to help No. 1 Virginia (10-1, 2-0 ACC) to a key league road victory over the No. 9 North Carolina Tar Heels (8-4, 1-2 ACC) on Saturday afternoon, in front of 5,138 fans at Fetzer Field. The attendance was the largest crowd to watch a lacrosse game at Fetzer Field since 1991.
With the win, UVa cinches no worse than the No. 2 seed for the ACC Tournament, hosted by the Cavaliers on April 20 and 22. Friday's home game with Duke will determine the league tournament's No. 1 seed.
Steele Stanwick led the way with seven points on three goals and four assists. The senior now has 243 career points, passing Kevin Pehlke (239) and Michael Watson (240) into third place all-time in the UVa annals. The hat trick was the 21st of his career and pushed Stanwick (114) past Jay Jalbert (112) into No. 10 in the UVa record book for goals. Chris Bocklet added three goals for his 23rd career hat trick. Bocklet (129) is now seven goals away from Ben Rubeor's (136) No. 5 spot at UVa in career goals.
"I am really proud of the team to come out the second week in a row on the road and perform the way we did," said UVa men's lacrosse head coach Dom Starsia. "It is a real credit to the players and the coaches to get everyone ready for this one. I thought we played very well for most of the game. I would have liked to have a few goals back at the end that we gave them, but I never thought we stopped playing. I thought we played smart and hard throughout."
UVa jumped out front, 2-0, behind back-to-back goals by Owen Van Arsdale and Chris LaPierre. Van Arsdale's score on a Steele Stanwick pass at 10:24 was the Charlottesville native's seventh goal of the season, but first since scoring two against Stony Brook on Feb. 25. LaPierre finished the run at 8:40 in transition.
UNC tallied its first goal at 7:04 in the first quarter on a Jimmy Bitter score, cutting into UVa's lead, 2-1. The Cavaliers and Tar Heels traded goals back and forth until it was 4-2 UVa, courtesy of a Rob Emery missile with 12:35 left in the second quarter.
The Tar Heels then held UVa scoreless for over six minutes, a span in which the home team tied the game, 4-4, via goals by Marcus Holman and Jimmy Dunster. The run ended with 6:56 remaining before the intermission. North Carolina did not get any closer the rest of the afternoon.
UVa ripped off a 6-0 run, while holding North Carolina scoreless for 20:23. The streak spelled the difference and gave the Cavaliers a 10-4 lead when Van Arsdale found the nylon with 1:49 left in the third quarter, capping the run. Stanwick scored two goals and dished two assists for UVa to lead the run. Bocklet, Emery and Matt Kugler also scored during that span.
After a Marcus Holman score with 1:32 left in the third quarter pushed North Carolina's deficit to five goals, 10-5, Bocklet and Matt White quickly elevated UVa's lead to 12-5. White's only score of the game came with 11:40 left in the game.
North Carolina managed its best run of the game, scoring four-straight goals to cut into UVa's lead, 12-8. Back-to-back Chad Tutton goals finished the run with 7:06 left in the game.
Goals by Ryan Tucker and Stanwick, followed by a Tutton and Ryan Creighton score, left the UVa advantage at four goals, 14-10, with 36 seconds left to play. Pat Harbeson put the period on the game with his open cage score with seven seconds left to play.
North Carolina outshot UVa, 41-35, and won a narrow faceoff margin, 14-13. UVa won the battle on the ground, 35-32, and had fewer turnovers, 12-13. Rob Fortunato saved 12 shots in the cage to earn the goalie win.
Virginia returns to the confines of Klöckner Stadium on Friday when the Duke Blue Devils come to Charlottesville. The contest will faceoff at 6 p.m. and will be televised live on ESPNU in HD.
Posted by Peter Carey on Saturday, April 07, 2012