From "Streaking the Lawn"... 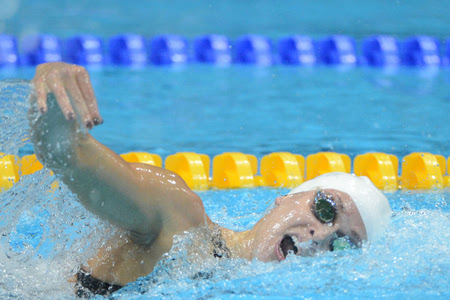 Kirby Lee-US PRESSWIRE - Presswire
1 day ago: Aug 1, 2012; London, United Kingdom; Lauren Perdue (USA) swims in the women's 4x200 relay heat during the London 2012 Olympic Games at Aquatics Centre. Mandatory Credit: Kirby Lee-USA TODAY Sports
Stop me if you've heard this one before: A Virginia Cavalier is now an Olympic gold medalist as Team USA Swimming takes gold in the 4x200 freestyle relay. It should. We basically ran the same story, for the boys, yesterday. But after Day 5 of the 2012 Olympic Games, Lauren Perdue can call herself an Olympic champion as the women's Team USA Swimming, led by Missy Franklin, Dana Vollmer, Shannon Vreeland and Allison Schmitt, won the gold medal on Wednesday night.
Perdue and McLean become the first Cavalier swimmers to combine for two gold medals in the same Olympiad, and she is just the fourth Cavalier swimmer ever -- one day behind McLean -- to bring home a gold.
The rising senior led off the relay team in the prelims with a time of 1:58.07.
So Virginia's medal count is now sitting at two gold medals, tied with South Africa for 14th in the world with 2 golds and nothing else. By total medal count, UVA and South Africa would be tied for 21st.
In other UVA Olympics news, former Wahoo David Karasek swam in the 200m individual medley, but finished seventh in his heat and was unable to advance to the semis.
A couple Hoos to watch for today: former Wahoo Katya Bachrouche will be competing for Lebanon in the 800m freestyle, while Paige Selenski and Michelle Vittese take on Australia for USA Field hockey. 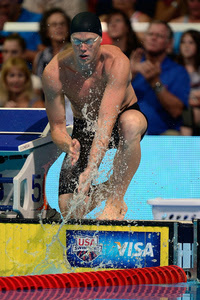 Jamie Squire - Getty ImagesMore photos »
Former Virginia swimmer Matt McLean is one of three Cavaliers to call themselves an Olympic gold medalist in a swimming event!
Less than a week into the 2012 Olympic Games and one Cavalier can already call himself an Olympic gold medalist. Matt McLean ('11) swam in the preliminaries of the men's 4x200 freestyle relay on Tuesday, setting Team USA's Ryan Lochte, Conor Dwyer, Ricky Berens and Michael Phelps up for a gold medal finish in the finals. As I'm sure you've read, Phelps became the most decorated Olympian ever, with 19 medals.
McLean becomes just the third Cavalier swimmer to have ever won an Olympic gold, following Ed Moses in 2000 in the 4x100 medley relay and Melanie Valerio in 1996 in the 4x100 freestyle relay.
Team Virginia is now tied in the medal count with the nations of Georgia, Lithuania and Slovenia.
What else has been happening in the Olympics? No spoilers here -- results are as of Tuesday, July 31.
Staying in the pool, incoming freshman Yannick Kaeser finished 24th in the men's 200m breast, finishing 24th for Switzerland. Current senior Lauren Perdue (USA) and 2012 graduate David Karasek (Switzerland) are competing today in the 4x200 freestyle relay and the 200 IM, respectively.
Virginia's Paige Selenski and Michelle Vittese are tearing it up for USA Field Hockey, who yesterday defeated world No. 2 Argentina, 1-0. Vittese made a critical assist in the game's lone goal. It was a great bounce back victory after having fallen to powerhouse Germany, 2-1, just two days prior.
On the pitch, USA women's scocer have yet to give up a match, tearing through their group 4-2 over France, 3-0 over Colombia, and 1-0 over North Korea. Former Wahoo Becky Saurbrunn substituted in the 75th minute of Tuesday's match against North Korea.
India's Somdev Devvarman had an early exit in the Olympics, falling to Finland's Jarkko Nieminin in the first round, 6-3, 61.
Will Coleman and his horse Twizzel have also bowed out of this year's Games. Coleman competed in both individual and team eventing for the equestrian Team USA. He finished 37th overall individually and contributed to a seventh place finish for Team USA.
Virginia alumna Inge Janssen competed for the Netherlands' rowing team for a fifth place finish in women's double sculls.
For more on UVA sports and the Virginia Cavaliers,
The University of Virginia is represented in London by 11 Olympians and two alternates. These athletes wear the colors of five different countries, including the United States (6), Switzerland, India, the Netherlands and Lebanon. Streaking the Lawn will keep you posted throughout the 2012 Olympic Games on how each of these past, present, and future UVA athletes perform.
Posted by Peter Carey on Thursday, August 02, 2012