On Palm Sunday, Jesus rides into the Perfect Storm by N.T. Wright

On Palm Sunday, Jesus rides into the Perfect Storm
by N.T. Wright in ABC Religion and Ethics 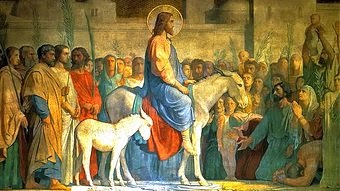 The crowd went wild as they got nearer. This was the moment they'd been waiting for. All the old songs came flooding back, and they were singing, chanting, cheering and laughing. At last, their dreams were going to come true. But in the middle of it all, their leader wasn't singing. He was in tears. Yes, their dreams were indeed coming true. But not in the way they had imagined.
He was not the king they expected. Not like the monarchs of old, who sat on their jewelled and ivory thrones, dispensing their justice and wisdom. Nor was he the great warrior-king some had wanted. He didn't raise an army and ride to battle at its head. He was riding on a donkey. And he was weeping - weeping for the dream that had to die, weeping for the sword that would pierce his supporters to the soul. Weeping for the kingdom that wasn't coming as well as the kingdom that was. What was it all about? What did Jesus think he was doing?
On Palm Sunday, Jesus was riding into the perfect storm. Recall the story of the famous "perfect storm." It was late October 1991. A New England fishing boat by the name ofAndrea Gail had sailed five hundred miles out into the Atlantic. But the weather was changing rapidly. A cold front moving along the American-Canadian border sent a strong disturbance through New England, while at the same time a large high-pressure system was building over the Maritime provinces of south-eastern Canada. This intensified the incoming low-pressure system, producing what locals called "The Halloween Nor'easter."
These circumstances alone could have created a strong storm, but then, like throwing petrol on a fire, a hurricane coming in from the Atlantic brought incalculable tropical energy to the mix. The forces of nature converged on the helpless Andrea Gail from the west, the north and the south-east. Ferocious winds and huge waves reduced the boat to matchwood. Only light debris was ever found.
The first two elements of Jesus's perfect storm are comparatively easy to describe; the third less so, but all-important if we are to understand both the original meaning of Palm Sunday and the meanings that it might have for us as we draw nearer to the cross in this holiest of weeks.
read it all HERE