Not for his own but for the public good 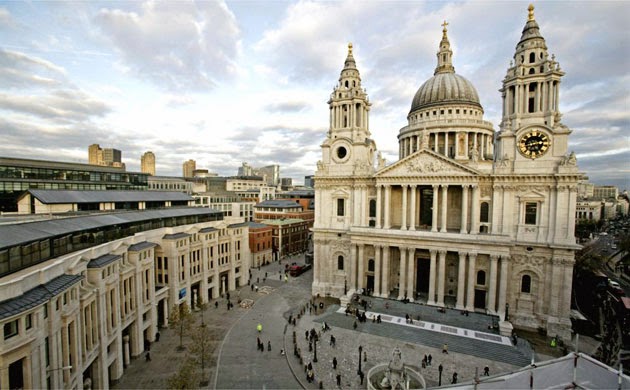 Not for his own but for the public good.
Epitaph to Sir Christopher Wren
1632 – 1723
In 1666, Sir Christopher Wren submitted a plan to reconstruct St. Paul’s Cathedral. Just six days after he submitted the plan, the great fire of London destroyed the central part of London and completely destroyed the cathedral. Over the next 46 years, Wren was to design and supervise the building of 51 churches in London. St. Paul’s Cathedral was his masterpiece.
Today, his work is still admired as classic, yet he was paid a salary worth less than that earned by the average unskilled worker in America today. His epitaph speaks volumes about him: “not for his own but for the public good.”
There is also a very interesting story that came from the rebuilding of St. Paul’s. One morning, Wren, who was not personally known by many of the workers, stopped and asked three different laborers, all engaged in the same task, what they were doing. He got three different answers.
The first said, “I am cutting this stone.”
The second answered, “I am earning three shillings, six pence a day.”
The third man straightened up, squared his shoulders, and still holding his mallet and chisel, replied, “I am helping Sir Christopher Wren build this great cathedral.”
They each had three different ways of looking at the same job.
The first one was just doing a task.
The second one was just earning a living.
The third was doing a small part of a great work. He did not personally know the architect or understand how his task fit into the overall plan. But he believed that there was a plan and that by following it, he would help create something greater than himself.
Which worker do you think was getting the most satisfaction from his work?
How do you view your job? Are you just doing a task, just earning a living? Or are you convinced that what you are doing is contributing to the betterment of mankind? The way you view your occupation will have a major impact on your life.
Decide your primary purpose in life and make sure your view of your occupation fits with your purpose. Will your efforts contribute to something greater than yourself and live after you are gone?
Wren died in 1723 and was buried at St. Paul’s. In the cathedral, an inscription dedicated to the architect reads ”Lector, si monumentum requiris, circumspice” (“Reader, if you seek his memorial, look around you”).
Posted by Peter Carey on Saturday, August 09, 2014