Why do baseball managers (coaches) wear the team uniforms?

Give it all a read HERE.  You can read an excerpt below. 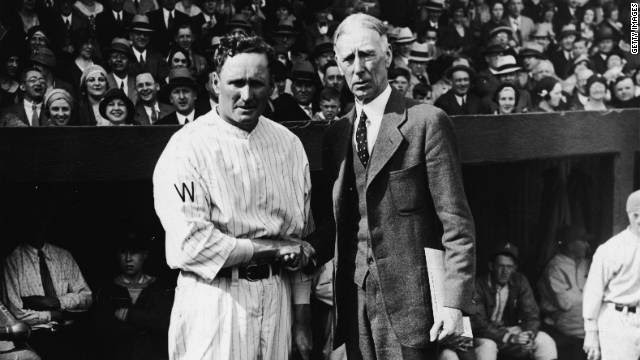 Wearing a suit, Philadelphia Athletics manager Connie Mack greets Walter Johnson, pitcher for the Washington Senators, in 1910.
STORY HIGHLIGHTS
Editor's note: CNN Contributor Bob Greene is a best-selling author whose books include "Late Edition: A Love Story" and "Chevrolet Summers, Dairy Queen Nights." His forthcoming "The Road Home: Tales from the Back Nine of Life" is being previewed at twitter.com/the_road_home. Watch him on CNN Newsroom on Mondays during the 9 a.m. (ET) hour.
(CNN) -- What sports fan can ever forget it?
The stirring sight, in Green Bay, Wisconsin, of the Packers charging out of the tunnel at Lambeau Field alongside their legendary leader, Vince Lombardi, who is wearing a football jersey, shoulder pads and a helmet as he prepares to coach his squad to another victory.
Or the heroic vision of Coach Phil Jackson with the members of the Chicago Bulls, or the Los Angeles Lakers, gathered around him during a timeout as, wearing his usual game-day attire of shorts, gym shoes and a sleeveless basketball jersey with a number on the front, he maps out on a clipboard the next series of plays for his team to run.
What? You say you don't remember scenes like those? You never saw Coach Lombardi on the sidelines dressed like a football fullback, and you never saw Coach Jackson giving instructions to his players while dressed like a point guard?
That's because it didn't happen. National Basketball Association coaches dress in street clothes; so do National Football League coaches (albeit with team logos).
But -- as you have undoubtedly noticed anew if you've been watching the World Series -- baseball managers don't. They dress like their players, and it's been such an integral part of baseball for so long that fans seldom ask themselves why.
"It's a little like Alice in Wonderland, through the looking glass, where in baseball things are reversed from the way they are in other sports," said John Thorn, the official historian of Major League Baseball. "In trying to explain the reason for it, folklore comes in."
Thorn knows about the traditions of baseball, and the reasons for them, as well or better than anyone alive. He said that in the earliest years of the game in the 19th century, "The person who was called the manager of a team was the business manager -- he was the person who made sure that the receipts were paid and that the train schedules were met. He didn't make any decisions about what went on during a game.
"The person who did that was called the captain. He did what a manager does today, but he also played. So at first, the person we would today call a manager wore a uniform because he was a participant in the game."
The tradition -- sort of -- continued even when, in the 20th century, the people calling the shots in the dugouts became non-players. Some of them wore uniforms even though they were never going to get into a game. But others -- Connie Mack of the Philadelphia Athletics and Burt Shotton of the Brooklyn Dodgers may have been the best known -- decided that if they were no longer baseball players, they shouldn't dress like baseball players.
Their position on the matter was rejected. For more than half a century now, every baseball manager -- like Tony LaRussa of the St. Louis Cardinals and Ron Washington of the Texas Rangers in this year's World Series -- has worn a uniform.
Some people believe that baseball's rules mandate this, although the only rule touching on it -- Rule 1:11(a) (1) -- says: "All players on a team shall wear uniforms identical in color, trim and style, and all players uniforms shall include minimal six-inch numbers on their backs." Nothing about what a manager must wear.
Read the rest HERE
Posted by Peter Carey on Saturday, October 11, 2014