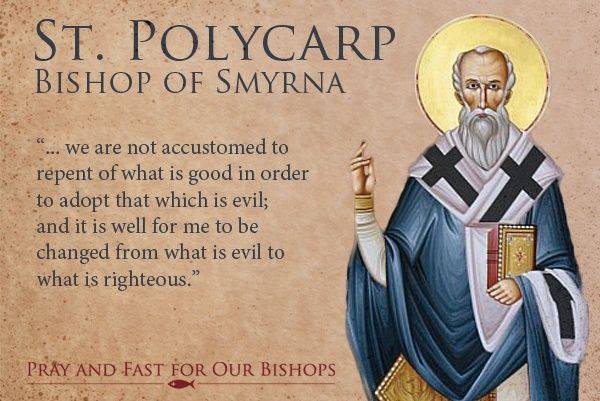 Today we celebrate St. Polycarp. My favorites saint and my namesake.
Polycarp, bishop of Smyrna, disciple of Saint John the Apostle and friend of Saint Ignatius of Antioch, was a revered Christian leader during the first half of the second century. Saint Irenaeus mentions Polycarp’s relationship with the Apostle John, noting that Polycarp, who knew John, was his own teacher and mentor.
Growing up among the Greek-speaking Christians of the Roman Empire, Polycarp received the teachings and recollections of individuals who had seen and known Jesus during his earthly life. This important connection – between Jesus' first disciples and apostles and their respective students – served to protect the Church against the influence of heresy during its earliest days, particularly against early attempts to deny Jesus' bodily incarnation and full humanity.
Irenaeus, wrote that Polycarp "was not only instructed by apostles, and conversed with many who had seen Christ; but he was also, by apostles, appointed bishop of the Church in Smyrna." In a surviving letter that he wrote to the Philippians, he reminded that Church – which had also received the teaching of St. Paul – not to surrender their faith to the "gnostic" teachers claiming to teach a more intellectually refined gospel.
Polycarp was denounced to the government, arrested, and tried on the charge of being a ChristianAt 86, Polycarp was led into the crowded Smyrna stadium to be burned alive.
When the Roman Magistrate urged him to save his life by cursing Christ, and place a pinch of incense in a brazier burning before a statue of Caesar. Polycarp replied: "Eighty-six years I have served Christ, and he never did me any wrong. How can I blaspheme my King and Savior?"
Polycarp was sentenced to be burned alive. Before the crowd, the Roman proconsul demanded again that he worship the emperor. "Hear me declare with boldness, I am a Christian," the bishop said. "And if you wish to learn what the doctrines of Christianity are, appoint me a day, and you shall hear them."
As he waited for the fire to be lighted, he prayed:
“Lord God Almighty, Father of your blessed and beloved child Jesus Christ, through whom we have received knowledge of you, God of angels and hosts and all creation, and of the whole race of the upright who live in your presence: I bless you that you have thought me worthy of this day and hour, to be numbered among the martyrs and share in the cup of Christ, for resurrection to eternal life, for soul and body in the incorruptibility of the Holy Spirit. Among them may I be accepted before you today, as a rich and acceptable sacrifice, just as you, the faithful and true God, have prepared and foreshown and brought about. For this reason and for all things I praise you, I bless you, I glorify you, through the eternal heavenly high priest Jesus Christ, your beloved child, through whom be glory to you, with him and the Holy Spirit, now and for the ages to come. Amen.
The fire was then lit The flames did not harm him. Losing patience, they ordered him to be stabbed to death. From the resulting wound, "there came forth a dove, and a great quantity of blood, so that the fire was extinguished.” The centurion ordered the saint’s body burned. The “Acts” of Polycarp’s martyrdom are the earliest preserved, fully reliable account of a Christian martyr’s death. He died in 155.
Saint Polycarp reminds us of a truth that takes us beyond our own experience and brings us face to face with the Lord’s stinging words: “No slave is greater than his master. If they persecuted me, they will also persecute you…”
May Saint Polycarp intercede for us and give us the strength and courage to bear witness to the faith in the face of opposition and persecution.
Posted by Peter Carey on Saturday, February 23, 2019