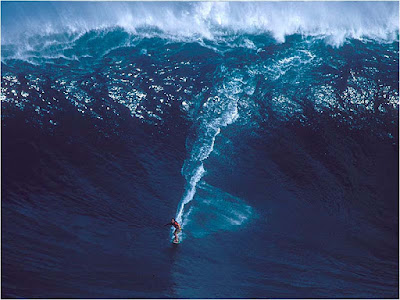 I feel like we are surfing the big waves of the North Shore of Hawaii these days in the Episcopal Church. The waves of sensationalistic news coverage of the recent House of Bishops' meeting in New Orleans are large waves indeed! As a newly ordained person in our Church I find myself in many conversations about this coverage, and the many, varied responses to it. Being busy planning chapels, preaching, teaching, participating in family life, and getting a bit of rest are occupying the vast majority of my time. However, in the midst of the wavy seas I was so glad to read two recent blog entries on the Episcopal Cafe blog that helped me to find a way to ride on through these waves. Roger Ferlo wrote a wonderful piece that gives some helpful perspective on the recent meeting of the House of Bishops, and I commend it to anyone who is feeling a bit weary by the recent rhetoric and news coverage.

"I thought I knew better. No good usually comes of this. In my long experience as a parish priest, there have been few occasions more dispiriting to me than these scheduled gathering of bishops. I say this not because I dislike bishops all that much. I admire a lot of them, count not a few as my friends, and most of the time feel rather sorry for them, isolated and misunderstood as they often are. But I find such occasions dispiriting because, in spite of everything I believe and teach about shared power and shared authority, I find myself buying the press’s line that the power and decision-making in the Episcopal Church in the United States are centered in the House of Bishops, and find myself hoping that whatever they decide this weekend down in New Orleans will set everything right.

And I am always proved wrong. There’s no reason to assume that these men and women will be up to such a task. It’s not their job. It’s a job all of us share. That fact underscores one of the ironies of Anglican history. In spite of our reputation in other parts of the Anglican Communion as a prime colonizer of heretical values and American power, the American church goes about its business in a distinctly post-colonial way. We long ago shed our allegiance to meddling foreign bishops. For two centuries our church has invested decision-making authority in a duly-elected bicameral legislature where both the ordained and the non-ordained have equal voice and equal standing. "


"Who knows where Paul would have positioned himself in the present fracas. If anyone knew about disarray and fracture, it was Paul, and we know that he was never above fomenting a little disarray himself. But he was faithful. That’s all that can be asked of any of us in the end—fidelity to God’s embracing love as we have experienced it in Jesus, and fidelity to each other, members of Christ’s body, wherever we stand or refuse to stand on the issues that divide us. Signing on to this kind of love will get you pretty far, regardless of what the bishops say or don’t say—no matter what political catastrophes seem to lie in store for Christ’s body, wounded and redeemed."

The second piece was written by Susan Daughtry who offers her own perspective on the documents that arose from the House of Bishops' Meeting. Rev. Daughtry''s take is helpful, pithy, funny, and wise...well worth a read, whether or not you agree with her take on things ...!

Since all kinds of uninformed reporters in the secular media have been adding their opinions to the mix, I thought I'd throw mine in there, which may be worth all the money you've just paid to get to see it, and may be just as objective as your hometown newspaper.

Here's a short, slanted, and totally oversimplified summary of what the House of Bishops' response to the Primates' Communique says (which, for the record, is nothing new at all):

First, we still love our gay and lesbian people. We agreed last summer not to consecrate them (though we're not making promises about anyone who might be single), or authorize any prayer book revisions for them, so that you would not write us off entirely. But only for a while. And yes, there are some of us who are doing everything we can short of those two promises to speak up with and for them. (If that troubles you, please see point The Fourth).

Second, we still love you and all of our Anglican Brothers and Sisters (though we're seriously peeved at a particular set of you who are using some seriously sketchy funding to put forward a massive smear campaign, take away buildings that were pledged to us, and give away a bunch of purple shirts to people who couldn't be duly elected to earn them). We love learning from you and with you. We want to follow Jesus right alongside you. We think we have a few things to contribute to you, too. Please don't stop speaking to us.

So, grab your boards and surf on over to read these two wonderful blog entries that may just help us to "hang ten" through these big waves.... 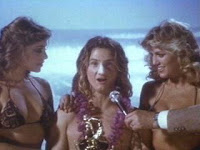