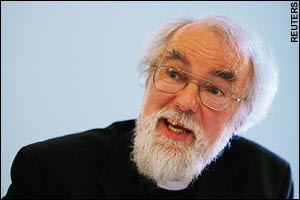 ...and thank God he's able to give a moment of reflection to something other than the Anglican Communion!

"Yesterday, Dr Rowan Williams met Gordon Brown for the first time since he became Prime Minister and the Archbishop clearly intends to get more involved in the national debate. "Politics is so much about human issues now," he says.

In his four years as head of the established Church, he has shied away from being a moral arbiter and rarely given an interview. When we meet him, however, he talks frankly about everything affecting society, from Pop Idol to gang culture.

"Is our society broken? I think it is," he says. "We are in a phase of our culture where the fragmentation of society is far more obvious. It's not just families, it is different ethnic communities and economic groups. We talk about access and equality the whole time, but in practice we all seem to live very segregated lives."

He goes on: "Outside my front door in Lambeth I see a society so dramatically different from across the river or in Canterbury. There is a level of desolation and loneliness and dysfunctionality which many people have very little concept of. If you sense that the world you live in is absolutely closed, that for all sorts of reasons you are unable to move outside, if nothing gives you aspirations, there is an imprisonment in that, there is a kind of resentment that comes with that and a frustration that can boil over in violence and street crime."

Inequality is, in his view, just a symptom of a wider moral vacuum. "I don't think that the huge wealth of some is the cause (of the problems), it is more that society just wants to reward business success and celebrity. If you're a teenager in Peckham neither of those are easily accessible."

Indeed, he is horrified by the triviality of modern society. "We are too celebrity obsessed, we have got into a dangerous cycle where fame is an objective in itself."

His children are 11 and 19. "I sometimes sit with them and watch The X Factor and it is heartbreaking to see people who plead with judges to get through because they just want to be famous so intensely," he says.

Broadcasters, he argues, are contributing to the moral decline. "There is a gladiatorial streak in the entertainment business now where increasingly humiliation is the way forward. That worries me, there is a kind of sadism that can't be good for us. It is the building-up and the pulling-down of contestants, it is pushing people into situations where they expose their vulnerability, encouraging a culture of shamelessness."

One of the Archbishop's key concerns is how the society we live in is damaging children. "What is lacking in children's lives is space. They are pressed into a testing culture, or even into a gang culture, they are bullied and manipulated until they fit in, they never have any time to develop in their own space."

He understands the urge to join a gang. "A lot of it is yearning for love, they want to fit in, if their families are as chaotic as some of them are, gangs give them a sense of belonging."

But he says pushy parents who rush children between ballet and violin lessons are suffocating their offspring too. "Children live crowded lives, we're not making their lives easy by pressurising them, whether it's the claustrophobia of gang culture or the claustrophobia of intense achievement in middle-class areas." "