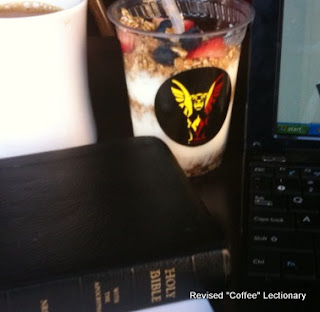 Things to check out:

www.textweek.com – all sorts of helpful information on the lectionary

www.revisedcoffeelectionary.blogspot.com  - a blog for this Bible study group

www.wordle.net – lots of fun to be had a wordle.net !

www.santospopsicles.blogspot.com – my blog…a variety of stuff… 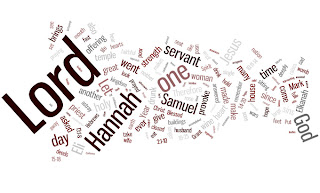 Blessed Lord, who caused all holy Scriptures to be written for our learning: Grant us so to hear them, read, mark, learn, and inwardly digest them, that we may embrace and ever hold fast the blessed hope of everlasting life, which you have given us in our Savior Jesus Christ; who lives and reigns with you and the Holy Spirit, one God, for ever and ever. Amen. 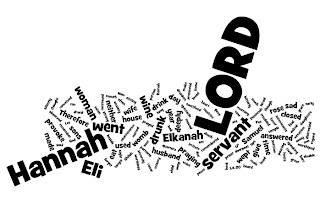 On the day when Elkanah sacrificed, he would give portions to his wife Peninnah and to all her sons and daughters; but to Hannah he gave a double portion, because he loved her, though the LORD had closed her womb. Her rival used to provoke her severely, to irritate her, because the LORD had closed her womb. So it went on year by year; as often as she went up to the house of the LORD, she used to provoke her. Therefore Hannah wept and would not eat. Her husband Elkanah said to her, "Hannah, why do you weep? Why do you not eat? Why is your heart sad? Am I not more to you than ten sons?"

After they had eaten and drunk at Shiloh, Hannah rose and presented herself before the LORD. Now Eli the priest was sitting on the seat beside the doorpost of the temple of the LORD. She was deeply distressed and prayed to the LORD, and wept bitterly. She made this vow: "O LORD of hosts, if only you will look on the misery of your servant, and remember me, and not forget your servant, but will give to your servant a male child, then I will set him before you as a nazirite until the day of his death. He shall drink neither wine nor intoxicants, and no razor shall touch his head."

As she continued praying before the LORD, Eli observed her mouth. Hannah was praying silently; only her lips moved, but her voice was not heard; therefore Eli thought she was drunk. So Eli said to her, "How long will you make a drunken spectacle of yourself? Put away your wine." But Hannah answered, "No, my lord, I am a woman deeply troubled; I have drunk neither wine nor strong drink, but I have been pouring out my soul before the LORD. Do not regard your servant as a worthless woman, for I have been speaking out of my great anxiety and vexation all this time." Then Eli answered, "Go in peace; the God of Israel grant the petition you have made to him." And she said, "Let your servant find favor in your sight." Then the woman went to her quarters, ate and drank with her husband, and her countenance was sad no longer.

They rose early in the morning and worshiped before the LORD; then they went back to their house at Ramah. Elkanah knew his wife Hannah, and the LORD remembered her. In due time Hannah conceived and bore a son. She named him Samuel, for she said, "I have asked him of the LORD." 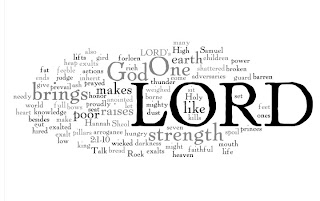 "My heart exults in the LORD;

my strength is exalted in my God.

no one besides you;

Talk no more so very proudly,

let not arrogance come from your mouth;

for the LORD is a God of knowledge,

and by him actions are weighed.

The bows of the mighty are broken,

but the feeble gird on strength.

Those who were full have hired themselves out for bread,

but those who were hungry are fat with spoil.

The barren has borne seven,

but she who has many children is forlorn.

The LORD kills and brings to life;

he brings down to Sheol and raises up.

he brings low, he also exalts.

He raises up the poor from the dust;

he lifts the needy from the ash heap,

to make them sit with princes

and inherit a seat of honor.

For the pillars of the earth are the LORD's,

and on them he has set the world.

"He will guard the feet of his faithful ones,

but the wicked shall be cut off in darkness;

The LORD! His adversaries shall be shattered;

the Most High will thunder in heaven.

The LORD will judge the ends of the earth;

he will give strength to his king,

and exalt the power of his anointed." 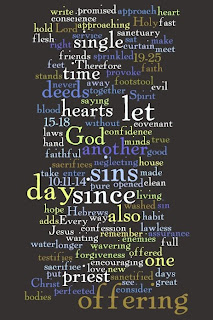 Every priest stands day after day at his service, offering again and again the same sacrifices that can never take away sins. But when Christ had offered for all time a single sacrifice for sins, "he sat down at the right hand of God," and since then has been waiting "until his enemies would be made a footstool for his feet." For by a single offering he has perfected for all time those who are sanctified. [And the Holy Spirit also testifies to us, for after saying,

"This is the covenant that I will make with them
after those days, says the Lord:
I will put my laws in their hearts,
and I will write them on their minds,"

"I will remember their sins and their lawless deeds no more."

Where there is forgiveness of these, there is no longer any offering for sin.]

Therefore, my friends, since we have confidence to enter the sanctuary by the blood of Jesus, by the new and living way that he opened for us through the curtain (that is, through his flesh), and since we have a great priest over the house of God, let us approach with a true heart in full assurance of faith, with our hearts sprinkled clean from an evil conscience and our bodies washed with pure water. Let us hold fast to the confession of our hope without wavering, for he who has promised is faithful. And let us consider how to provoke one another to love and good deeds, not neglecting to meet together, as is the habit of some, but encouraging one another, and all the more as you see the Day approaching. 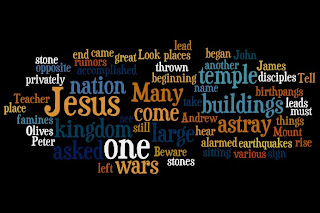 As Jesus came out of the temple, one of his disciples said to him, "Look, Teacher, what large stones and what large buildings!" Then Jesus asked him, "Do you see these great buildings? Not one stone will be left here upon another; all will be thrown down."

When he was sitting on the Mount of Olives opposite the temple, Peter, James, John, and Andrew asked him privately, "Tell us, when will this be, and what will be the sign that all these things are about to be accomplished?" Then Jesus began to say to them, "Beware that no one leads you astray. Many will come in my name and say, `I am he!’ and they will lead many astray. When you hear of wars and rumors of wars, do not be alarmed; this must take place, but the end is still to come. For nation will rise against nation, and kingdom against kingdom; there will be earthquakes in various places; there will be famines. This is but the beginning of the birthpangs."