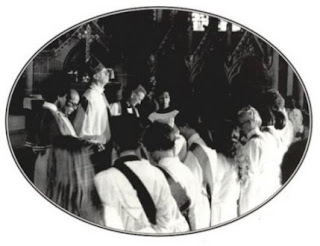 On July 29, 1974 eleven women broke the barrier so long in place against the ordination of women to the priesthood of the Anglican Church when they were "irregularly" ordained to the priesthood in Philadelphia.  These women are often referred to as the "Philadelphia 11"

Although there was no specific canon that specifically prohibited ordaining women to the priesthood, the canons required a recommendation from the standing committee.  Many were upset because these women did have such a recommendation.  While others were ready for change and ventured into new territory for the Episcopal Church.

On August 15, 1974, the House of Bishops, called to an emergency meeting, denounced the ordinations and declared them invalid. Charges were filed against the bishops who ordained the women and attempts were made to prevent the women from serving their priestly ministries.

In September 1976, the General Convention of the Episcopal Church approved the ordination of women to the priesthood and episcopate.

Hat timp to the Rev. Elizabeth Kaeton via Facebook for the reminder...
Posted by Peter Carey on Thursday, July 29, 2010