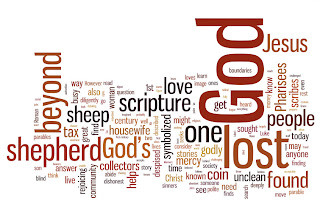 The Rev. Peter M. Carey
12 September 2010 – Sermon
Emmanuel Episcopal Church
Greenwood, Virginia
In the Episcopal Diocese of Virginia
Proper 19 – Luke 15:1-10
Today, we dip into Luke’s narrative and learn, once again, that Jesus is disobeying cultural norms, and is violating the Miss Manners guidelines of his time.  Jesus is keeping company with “tax collectors and sinners,” those who were despised and avoided by the apparently “godly” people of his time.  The “godly” people of his time, the “professional” godly people – leaders in the religious community, those who regularly prayed, attended church, and abided by the Law.  The “Pharisees and scribes” would be people who were the pillars of the community.
The question behind their observation in verse 2 is, “is anyone beyond God’s mercy?”  And so, Jesus tells three stories which may point to an answer.  Tax collectors were known for their unethical behavior, and while they were Jewish, they were in league with the Romans – and most often extorted money from their fellow Jews. The Roman authorities contracted out collection of taxes, and so it was up to a tax collector how he got the money.  Fraud and excessive profits were common.
Jesus defends associating with these people, using parables. Jesus asks if you had many and lost one, wouldn’t you search until you found it?
The sheep and coin that are lost, are sought after, and are found.  God is symbolized by he male shepherd and the female housewife.  Pharisees would have been outraged by God being symbolized by a woman – and first-century shepherds were considered lawless, dishonest and unclean. The sheep and the coin cannot find their owner on their own.  They need the help of the shepherd or the housewife to help.  God tenaciously loves even those who are unable to find him, and seeks them, and finds them, and brings them home.  Is anyone beyond God’s mercy?  Would a shepherd in the 1st century really care about one sheep?  God is that kind of shepherd.  When the lost is found there is great rejoicing.
Well, you might say, this is interesting – perhaps, but is there anything of tangible value from this passage to take with me into my week?  Perhaps.  Here is one way of looking at a piece of scripture:  1)  What does this scripture say about God?  2)  How does this scripture move us to see things in a new way?  3)  What does this scripture move us to do?
1)    God is described by Jesus and symbolized as a shepherd, who is a figure who is known to be dishonest and even unclean. However, this shepherd is willing to leave everything aside in order to chase after that one lost sheep.  This shepherd loves all the sheep, but works diligently to bring back the one who is lost, the one who needs God’s help, God’s grace, to re-enter the fold.  God is also symbolized by Jesus as a housewife who also seeks out and finds the lost coin.  God is symbolized as a 1st century woman who would have very little social standing, few rights of her own, and who was largely the subject of her father and her husband.  God the marginalized and despised shepherd who is righteous, and God the oppressed woman.  God as shepherd, and God as housewife celebrates the finding of the sheep and the ring.  There is great rejoicing – God is ecstatically happy that one who is lost is found, one who is blind can see.  Is anyone beyond God’s mercy?
2)    This scripture may point out to us something of an answer to the question, “Is anyone beyond God’s mercy? … but we probably need to read the rest of the 15th  chapter of Luke to get the rest of the sermon.  And so, we learn about the radical and challenging love of God, going beyond the imagination of 1st century people – to reach out beyond the polite society of “Pharisees and scribes” and out to those who were despised tax collectors, and those who were sinners, those who were unclean, those who were not regarded as “godly” actually were Godly, and not only that, the beloved of God.  And so, who is beyond the pale today, who are the unloved, who are the ones who live on the margins, who are the ones to whom God’s love is extended?  How might this scripture help us to look beyond our own “Pharisaical and scribal lenses”? "Beloved, let us love one another, because love is from God . . . God is love, and those who abide in love abide in God, and God abides in them." (1 John 4:1, 16b)
3)    This scripture may appeal to us when we are lost – and we know that God is chasing us down, especially when we don’t think we can find God – God is finding us.  So, how might we live more fully, more deeply, more abundant lives if we truly know that God not only loves us, but has imbedded a GPS device in our hearts, and we will be chased down by God when we are lost.
This scripture may also inspire us to get busy, for we are the Body of Christ, and this means that we are to embody God’s love in the world.  Christ does not want us to be narrow “Pharisees and scribes,” debating about who is in and who is out, about the minutia and “small stuff.”  Christ wants us to get busy – seeking out the lost with dispatch, and rejoicing when the lost are found, when the blind can see.  God’s Amazing Grace is poured out on us, but then we need to get busy proclaiming and living the Good News.  “Is anyone beyond God’s mercy?”
Posted by Peter Carey on Sunday, September 12, 2010

Email ThisBlogThis!Share to TwitterShare to FacebookShare to Pinterest
Labels: Luke 15:1-10, My sermons