The Dalai Lama is coming to Charlottesville! 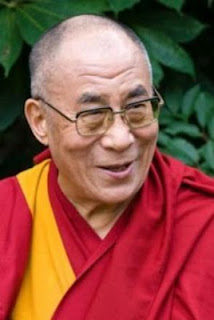 from The Daily Progress
The Dalai Lama will speak in downtown Charlottesville this fall in what will be a return visit to Central Virginia by one of the world’s most esteemed public figures.
On Oct. 11, the Tibetan spiritual leader will speak at a medical conference at the Paramount Theater and deliver a public address at the nTelos Wireless Pavilion, according to those who helped organize the visit. The theme of the visit is “Compassion as a Global Remedy.”
“I think that he’s one of the few very widely known leaders whose message we associate with him as soon as we hear his name,” said Jeffrey Hopkins, emeritus professor of Tibetan and Buddhist studies at the University of Virginia, who first met the Dalai Lama in 1972 and went on to work as his interpreter.
Hopkins helped organize the Dalai Lama’s previous two visits to UVa in 1979 and 1998. Hopkins, who said this year’s visit has been in the works for years, has also worked with the spiritual leader on numerous books.
“He’s worked tirelessly to develop a message of compassion to all persons whether they’re religious or not, whether they’re Buddhist or not,” Hopkins said. “This has been received very widely.”
The trip was orchestrated by American Heritage Voices, a local nonprofit focused on American-Indian culture, the Tibetan Association of Charlottesville and the UMA Institute for Tibetan Studies, a nonprofit founded by Hopkins.
Charlottesville spokesman Joe Rice said the city will be involved in logistical matters such as providing police escorts.
“We are an official host as far as the city of Charlottesville is concerned,” Rice said.
Marjorie Sargent of AHV said a Dalai Lama representative is in town Monday and today to help plan trip logistics.
According to a tentative schedule, the Dalai Lama will speak at the Paramount from 10 to 11:30 a.m. He then plans to walk to the pavilion, where he’ll speak from 1:30 to 3 p.m.
Sargent said the events will be open to the public and tickets will be “affordable.”
“We want Charlottesville, which has such a diverse community, to be able to benefit,” Sargent said.
More information about ticket availability will be released later this week, Sargent said. She added that both events will be live-streamed to screens set up at Piedmont Virginia Community College, the Jefferson Theater and CitySpace.
The city also plans to set up a website to provide information about the trip.
The Dalai Lama, who celebrated his 77th birthday a few days ago, describes himself as a “simple Buddhist monk.”
Bearing the religious name Tenzin Gyatso, the current Dalai Lama is the 14th in a line of monks whom Tibetan Buddhists believe to be reincarnations of their predecessors.
He was awarded the Nobel Peace Prize in 1989 for his nonviolent campaign to liberate Tibet from Chinese rule. He fled Tibet in 1959 after an unsuccessful revolt, and now operates out of Dharamsala, India.
In 1993, the Dalai Lama visited Monticello shortly after Thomas Jefferson’s 250th birthday celebration. After that visit, those who led him on the tour said he seemed “captivated” by Monticello and made it known that he believed Jefferson was a great man.
Fourteen years ago, he attended a historic conference of Nobel peace laureates at UVa that also included Archbishop Desmond Tutu and six other peace prize recipients.
In 2008, the Charlottesville City Council drew criticism from the Chinese government for flying the Tibetan flag above City Hall in support of Tibetan Uprising Day, celebrated on March 10.
Posted by Peter Carey on Tuesday, July 17, 2012