Communion on the moon 45 years ago

45 Years ago humans stepped onto the moon.  Did you know that they also shared communion?

Pretty interesting blogpost from 5 years ago over at "Irenic Thoughts."  Check it out:


Communion on the Moon 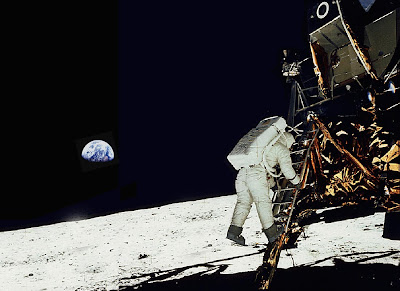 You will read and hear much today of what happened 40 years ago on July 20, 1969. Neil Armstrong's "One small step for man" will be replayed again and again. But minutes after the lunar landing and prior to the moonwalk, Lunar Module pilot Buzz Aldrin radioed back to earth,

Houston, this is Eagle. This is the LM pilot speaking. I would like to request a few moments of silence. I would like to invite each person listening in, whoever or wherever he may be, to contemplate for a moment the events of the last few hours, and to give thanks in his own individual way.

Silence was all he could request. In his autobiography Aldrin would write, "NASA was already embroiled in a legal battle with Madelyn Murray O'Hare, the celebrated opponent of religion, over the Apollo 8 crew reading from Genesis while orbiting the moon at Christmas." A presbyterian layman, Aldrin arranged to take reserved sacrament (already blessed bread and wine) with him to the moon. He had a Ph.D. in astrophysics from MIT, and he was a man smart enough to think of no better way to offer thanks for the moon landing. He had permission to bring the sacrament on board as long as he didn't talk of it for two decades. He would later write,

In the radio blackout, I opened the little plastic packages which contained the bread and the wine. I poured the wine into the chalice our church had given me.

In the one-sixth gravity of the moon, the wine slowly curled and gracefully came up the side of the cup. Then I read the Scripture, "I am the vine, you are the branches. Whosoever abides in me will bring forth much fruit....Eagle's metal body creaked. I ate the tiny Host and swallowed the wine. I gave thanks for the intelligence and spirit that had brought two young pilots to the Sea of Tranquility. It was interesting for me to think: the very first liquid ever poured on the moon, and the very first food eaten there, were the communion elements.

This day marks the 40th anniversary of that communion on the moon. The following prayer for space travel is appropriate for this day:

Creator of the universe, whose dominion extends through the immensity of space: guide and guard those who seek to fathom its mysteries. Save us from arrogance lest we forget that our achievements are grounded in thee, and, by the grace of thy Holy Spirit, protect our travels beyond the reaches of earth, that we may glory ever more in the wonder of thy creation: through Jesus Christ, thy Word, by whom all things came to be, who with thee and the Holy Spirit liveth and reigneth, one God, for ever and ever. Amen.