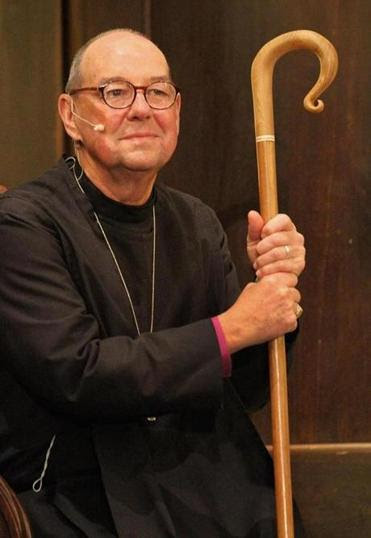 WENDY MAEDA/GLOBE STAFF
The Rt. Rev. M. Thomas Shaw was photographed in April.
As cold rain and a chill wind scoured Copley Square on Saturday afternoon, some 1,300 mourners gathered at Trinity Church to say a final farewell to the Rt. Rev. M. Thomas Shaw, who served as bishop of the Episcopal Diocese of Massachusetts for two decades.
He died last month after a 17-month battle with brain cancer. He was 69, and his diagnosis came shortly after he announced plans to retire.
Shaw was a professed monk of the Society of St. John the Evangelist, a religous community based in Cambridge. His funeral reflected both his vaunted office and his preference for simplicity.
In an unforgettable moment near the end of the service, Trinity’s rumbling organ and enormous choir were quiet. As incense wafted around them, Shaw’s religious brothers, clad in their black robes, surrounded his wooden casket and chanted the dismissal sung at the monastery each night in the last service before sleep.
Lord, you now have set your servant free
To go in peace as you have promised.
A number of mourners who attended the service spoke afterward about Shaw’s profound spirituality.
“You felt like you were talking to heaven when you talked to him,” said Frankie Brescia of Dorchester, a member of the Cathedral Church of St. Paul downtown, cracking a rueful smile. “He had a pretty direct line up there.”
Read the rest HERE at the Boston Globe
Posted by Peter Carey on Monday, November 03, 2014