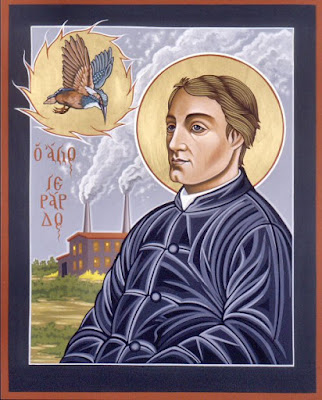 From "Telling the Stories that Matter" blog

Gerard Manley Hopkins was a poet and so he wrote poetry. It was a natural thing. Not only did he produce beautiful art in words and thoughts but it was, by itself, beautiful in the way he did it. At its very essence, Gerard's art produced art. But he struggled mightily with a variety of sins and compulsions. To add to his pain, he suffered under long bouts of depression and anxiety that often left him feeling hopeless. This depression and dismay led him to write poetry while at the same time despising the product of his pen--such is the nature of most foul depression. He resolved to become a Jesuit and a priest and in this resolution he took his poetry and burned it as an act of sacrifice and renunciation. Apparently, Gerard had decided that the mind of a poet could not be or become the mind of a priest. Though many have insisted he was wrong to think so, perhaps he was right at the time. Perhaps Gerard-who-was had to lay down a part of himself to find Gerard-who-could-be. So, his aims changed but poetry still beat within his heart and his words ("I wake and feel the fell of dark, not day") even now give expression to that dark predator that haunted his waking hours:

I wake and feel the fell of dark, not day.What hours, O what black hours we have spentThis night! what sights you, heart, saw; ways you went!And more must, in yet longer light's delay.With witness I speak this. But where I sayHours I mean years, mean life. And my lamentIs cries countless, cries like dead letters sentTo dearest him that lives alas! away.I am gall, I am heartburn. God's most deep decreeBitter would have me taste: my taste was me;Bones built in me, flesh filled, blood brimmed the curse.Selfyeast of spirit a dull dough sours. I see The lost are like this, and their scourge to beAs I am mine, their sweating selves, but worse.

Read it all HERE at Telling the Stories that Matter