Today marks the commemoration of Pope John XXIII, a marvelous witness and leader of the faith of Jesus Christ. 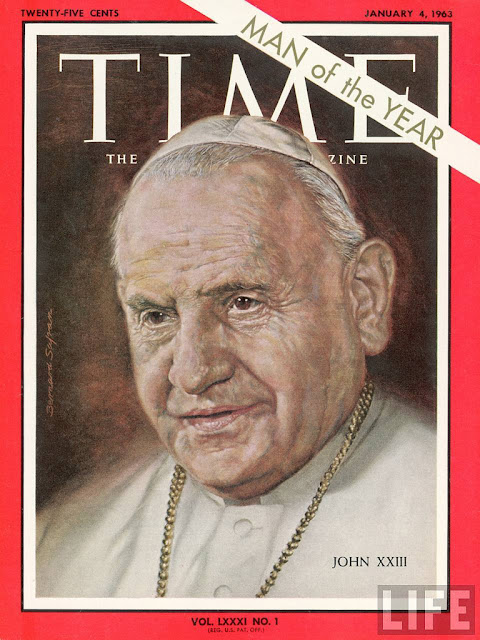 Almighty God, whose will it is to heal all division and discord among those who call upon the name of your Son: We thank you for the good will shown in your servant John, and we pray that we may always be ready to hear our fellow Christians with humility and a willingness to learn, and may also speak the truth in love, to the healing of faction and the renewed witness of your people; through Jesus Christ our Lord, who lives and reigns with you in the unity of the Holy Spirit, one God, now and ever. Amen.
Short biography below by Jame Keifer, posted at MissionStClare

Angelo Roncalli, the third of thirteen children, was born to a family of farmers 25 November 1881 at Sotto il Monte in northern Italy. At the age of twelve he entered the diocesan seminary at Bergamo and came under the influence of progressive leaders of the Italian social movement. He then went to the seminary at Rome on a scholarship, interrupted his education there to serve for a year as a volunteer in the Italian army, and returned to the seminary to take a doctorate in theology. He was ordained 10 August 1904.
He was appointed the secretary to the new bishop of Bergamo and with him learned forms of social action and gained an understanding of the problems of the working classes. Meanwhile he taught at the diocesan seminary.
In 1915 he was recalled to the army in World War I and served in the medical and chaplaincy corps. After the war he was made the spiritual director of the seminary. In 1921 he was called to Rome by the pope and made director of the Society for the Propagation of the Faith in Italy.
He was consecrated archbishop in 1925 and sent to Bulgaria. At Sofia the capital he dealt with the problems of Eastern Rite Catholics in a troubled oriental land.
In 1934 he was sent to Turkey and Greece. There he fostered harmony among various national groups in Istanbul in a time of anti-religious fervor under Kemal Ataturk. Archbishop Roncalli introduced the use of the Turkish language in worship and in the official documents of the church and eventually won the esteem of some high Turkish statesmen. He made a series of conciliatory gestures toward the Orthodox and met with the Ecumenical Patriarch Benjamin in 1939. During World War II, Istanbul was a center of intrigue and espionage, and the archbishop gathered information useful to Rome and helped Jews flee persecution. His work in Greece, which was occupied by the Nazis, was less successful.
When he was sixty-four years old (1944), an age when most men are thinking of retirement, Roncalli was chosen by Pius XII for the difficult post of nuncio to Paris, where he worked to heal the divisions caused by the war. He travelled widely.
[A nuncio, where they exist, has the rank of an ambassador. While in Paris, Roncalli once said: "You know, it's rough being a papal nuncio. I get invited to these diplomatic parties where everyone stands around with a small plate of canapes trying not to look bored. Then, in walks a shapely woman in a low-cut, revealing gown, and everyone in the whole place turns around and looks -- at me!"]
At age seventy-two he was made cardinal and Patriarch of Venice and he had charge of a large diocese for the first time in his life. He quickly won the affection of his people, visiting parishes, caring for the working classes, establishing new parishes, and developing forms of social action.
In 1958, nearly seventy-seven years old, he was elected pope upon the death of Pius XII. He was expected by many to be a caretaker and transitional pope, but he astonished the church and the world with his energy and reforming spirit.
[Before the accession of John XXIII, when the official Vatican newspaper, the Osservatore Romano, quoted any statement by the Pope, on any matter whatever, it had a standard introduction: "These are the words of the Holy Father, as we were able to gather them from his august lips:" Under Pope John, this was changed to "The Pope said:" This and similar changes, not in themselves significant, helped to set the tone for the new pontificate.]
He expanded and internationalized the college of cardinals, called the first diocesan synod of Rome in history, revised the code of canon law, and called the Second Vatican Council to revitalize the church. This council was the major achievement of his life [and undertook] to renew the life of the church and its teachings, with the ultimate goal of the reunification of Christianity.
[The council marked the beginning of a new spirit of openness on the part of Rome toward Christians not of the papal obedience. The story is told that, when it was announced that Protestantleaders would be invited to the council as observers, the conservative Cardinal Ottaviani was horrified. He said:
"But Your Holiness, Protestants are heretics!"
"Do not say, 'heretics,' my son. Say, 'separated brethren.'"
"They are in league with the devil!"
"Do not say, 'devil,' my son. Say, 'separated angel.'"]
Moreover, as Bishop of Rome, he was unremitting in his care of his diocese, visiting hospitals, prisons, and schools. When he died 3 June 1963, he had won the widespread affection of Christian and non-Christian alike.
written by James Kiefer