Homily on Theodore of Tarsus ~ Archbishop of Canterbury ~ 690 ce 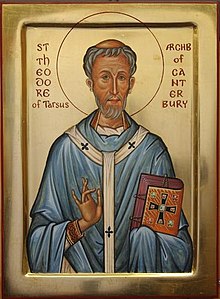 The Collect
Almighty God, you called your servant Theodore of Tarsus from Rome to the see of Canterbury, and gave him gifts of grace and wisdom to establish unity where there had been division, and order where there had been chaos: Create in your Church, by the operation of the Holy Spirit, such godly union and concord that it may proclaim, both by word and example, the Gospel of the Prince of Peace; who lives and reigns with you and the Holy Spirit, one God, for ever and ever. Amen.

You then, my child, be strong in the grace that is in Christ Jesus; and what you have heard from me through many witnesses entrust to faithful people who will be able to teach others as well. Share in suffering like a good soldier of Christ Jesus. No one serving in the army gets entangled in everyday affairs; the soldier's aim is to please the enlisting officer. And in the case of an athlete, no one is crowned without competing according to the rules. Therefore I endure everything for the sake of the elect, so that they may also obtain the salvation that is in Christ Jesus, with eternal glory.

Jesus said, “For God so loved the world that he gave his only Son, so that everyone who believes in him may not perish but may have eternal life. “Indeed, God did not send the Son into the world to condemn the world, but in order that the world might be saved through him. Those who believe in him are not condemned; but those who do not believe are condemned already, because they have not believed in the name of the only Son of God. And this is the judgment, that the light has come into the world, and people loved darkness rather than light because their deeds were evil. For all who do evil hate the light and do not come to the light, so that their deeds may not be exposed. But those who do what is true come to the light, so that it may be clearly seen that their deeds have been done in God.”

John’s gospel reminds us that God is the ultimate giver, who gives us life, who gives us all we have, and who gave the world Jesus, “for God so loved the world that he gave his only Son.”  The gifts of God are given in love, so that the world might be transformed into the beloved community.  God constantly surprises us with his boundless love, but also with his creativity.  When John writes, “God did not send the Son into the world to condemn the world, but in order that be saved through him. “  Those who take up the cross and follow Jesus are a part of this saving action.

Today we remember Theodore of Tarsus who was one who took up his cross, and followed Jesus, and was quite a surprising figure in the history of the church. Theodore was a monk living in Rome when word came that there needed to be a new Archbishop of Canterbury.  The English elected the next Archbishop, Wighard, and sent him to Rome to be consecrated, but before he could be consecrated by the Pope, he died.

Pope Vitalian chose the next Archbishop, and surely surprised many by choosing a 65 year old monk from Tarsus in the Holy Land, who had not even been ordained a priest to go to England.  This surprising choice turned out to be a very good one. Theodore was "the first archbishop whom all the English obeyed" (Bede).

“Theodore filled the vacant bishoprics and in 672 presided over the first council of the entire English Church, at Hertford. He established definite territorial boundaries for the various dioceses, and founded new dioceses where needed. He found the Church of England an unorganized missionary body, and left it a fully ordered province of the universal Church. The body of canon law drawn up under his supervision, and his structure of dioceses and parishes, survived the turmoil of the sixteenth and seventeenth centuries and are substantially intact today.

He also founded a school at Canterbury that trained Christians from both the Celtic and the Roman traditions, and did much to unite the two groups.”
(from http://justus.anglican.org/resources/bio/250.html )


This monk from the Holy Land, living and working in Rome, was plucked from his life to serve a particular purpose, a challenging mission to England.  God chose this surprising figure to find a way to spread the Gospel of love, and build up the Church.  God also pours out his surprising love on us, and blesses us with his surprising love.  May we each be as ready and willing as Theodore to take up God’s gospel of love, and proclaim it to the world.
Posted by Peter Carey on Tuesday, September 19, 2017