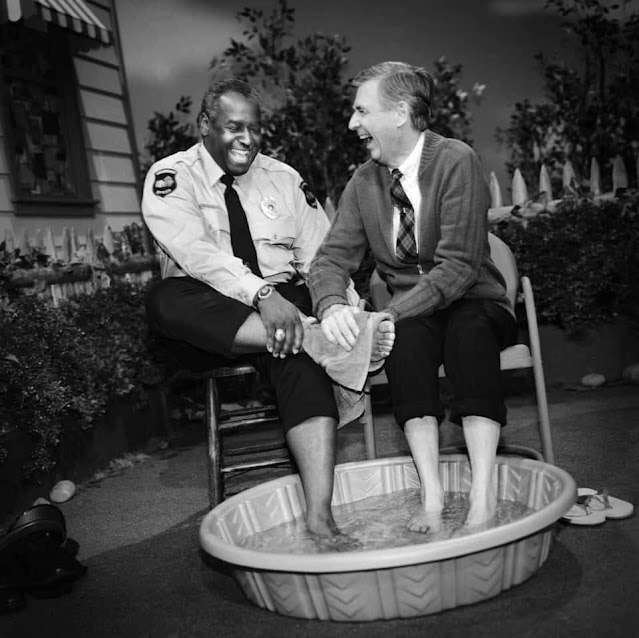 In August, 1968, the country was still reeling from the assassination of Martin Luther King, Jr. four months earlier, and the race riots that followed on its heels. Nightly news showed burning cities, radicals and reactionaries snarling at each other across the cultural divide.

A brand new children’s show out of Pittsburgh, which had gone national the previous year, took a different approach. Fred Rogers had met François Clemmons at a church service after hearing him sing, and asked him to join the show. Mr. Roger’s Neighborhood introduced Officer Clemmons, a black police officer who was a kindly, responsible authority figure, kept his neighborhood safe, and was Mr. Roger’s equal, colleague and neighbor.

A year later in 1969 when black Americans were still prevented from swimming alongside whites, Mr. Rogers invited Officer Clemmons to join him and cool his feet in a plastic wading pool, breaking a well-known color barrier. And there they were, brown feet and white feet, side by side in the water, silently, contemplatively, without comment. The episode culminated with Rogers drying off Clemmons’ feet. Most young kids were probably unaware of the real weight the episode carried, its scriptural overtones, but the image of a white man tending to the needs of a black man was seared in their minds nonetheless.

25 years later, when François Clemmons retired, his last scene on the show revisited that same wading pool, this time reminiscing. Officer Clemmons asked Mr. Rogers what he’d been thinking during their silent interlude a quarter century before. Fred Rogers’ answer was that he’d been thinking of the many ways people say “I love you.”

In a world screaming out for tolerance, acceptance, kindness, and love - choose to be a Fred Rogers - because if more people could find a way to love others the way he did, without barriers, this world would be a much better place...