Are we about to go to war against Iran?

Wow, is this really going to happen .... what is GWB doing? 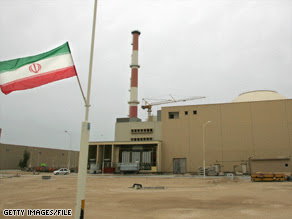 An Iranian flag flies outside the building containing the reactor of Bushehr nuclear power plant, south of Tehran.

White House, CIA and State Department officials declined comment on Hersh's report, which appears in this week's issue of The New Yorker.

Hersh told CNN's "Late Edition with Wolf Blitzer" that Congress has authorized up to $400 million to fund the secret campaign, which involves U.S. special operations troops and Iranian dissidents.

President Bush and Vice President Dick Cheney have rejected findings from U.S. intelligence agencies that Iran has halted a clandestine effort to build a nuclear bomb and "do not want to leave Iran in place with a nuclear program," Hersh said.

"They believe that their mission is to make sure that before they get out of office next year, either Iran is attacked or it stops its weapons program," Hersh said.

The new article, "Preparing the Battlefield," is the latest in a series of articles accusing the Bush administration of preparing for war with Iran.

He based the report on accounts from current and former military, intelligence, and congressional sources. Watch Hersh discuss what he says are the administration's plans for Iran