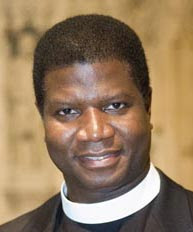 As he kneeled at the altar of Washington National Cathedral, the Rev. Canon Eugene Taylor Sutton was surrounded by bishops -- their hands laid on his back, their lips moving in whispered prayer.

When Sutton rose moments later and turned to face the congregation, he did so as Maryland's first African American Episcopal bishop.

Almost 3,000 people attended the service in Northwest Washington, including more than 30 bishops from across the country.

"The significance of it is just overwhelming," said Stewart Lucas, an associate rector from Annapolis who watched the 2 1/2 -hour ceremony from the north wing of the cathedral. "There's been an excitement in the churches ever since he was elected."

There are other African American bishops in the U.S. Episcopal Church, whose membership is predominantly white, but there has never been one in Maryland -- which has a large black population, especially in the diocese's seat, Baltimore.

There is a deeply symbolic element to his election, Sutton has said. The church's first Maryland bishop, the Rev. Thomas John Claggett, was a slave owner. Sutton himself is the descendant of slaves.

Sutton, 54, was raised in Washington. His father was an auto repair shop owner, and his mother was a State Department employee. He attended Baptist churches as a youngster, but was introduced to the Episcopal Church as a teenager.

In Washington, he has served as an associate rector and priest in charge at two churches, St. Columba's and St. Margaret's. In 1997, he co-founded the Contemplative Outreach of Metropolitan Washington, an ecumenical network devoted to contemplating the gospel in daily life.

Until his consecration yesterday, he had been serving as canon pastor at Washington National Cathedral and director of its Center for Prayer and Pilgrimage, which he said was work that he held close to heart.

Even as the last-minute preparations for the ceremony began, he told the congregation yesterday, he had been praying at the cathedral's center.

Sutton intends to be a vocal bishop once he arrives in Baltimore, and one who is unafraid of delving into the problems evident in that city. In his first message -- a written statement -- to his new flock in Maryland, Sutton talked about the problems of the poor and children falling behind in Baltimore's public school system.

He outlined plans to lead a charge for the environment within Maryland's Episcopal churches. He has said repeatedly since his election in March that he would rather be known as the diocese's first green bishop than simply its first black bishop.

He also highlighted the need for reconciliation because of deep divisions in today's society, describing "strained relationships between black and white, rich and poor, male and female, conservative and liberal."

"The world is crying out for healing," Sutton wrote, "and wherever there is division and brokenness, we are called to build bridges."