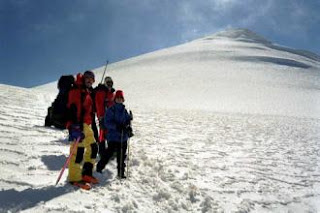 TURKEY - In a discovery that has long been expected by some, but is inconceivable to most, a group of climbers recently discovered a copy of the King James Bible within remains of Noah's Ark.

Expedition leader Dr. Kyle Richardson, who is a part-time professor at Pensacola Christian College, told TBNN, "We had been planning this climb for over a year, hoping to come across wooden remains of Noah's Ark. When we found several very old planks on the north face of the mountain, near the summit, we thought we had found what we were looking for. After a closer inspection, we knew we were right. For example, several of the planks had pictures carved into them of various forms of animals that are now extinct. Also, there were eight names carved in the wood, presumably those of Noah, his wife, his sons, and his sons' wives."

Fellow climber Wendy Richardson, wife of Kyle, explained their greatest discovery. According to Wendy, "As we were carefully looking under a few of the wooden planks, we came across something that we did not expect. Inside a small wooden compartment, we found a near-perfect copy of the King James Bible. Based on where we found it, we have concluded that this bible was actually the one used by Noah during the flood so many years ago. The more we think about it now, the more sense it makes."

Although several Old and New Testament experts have raised serious questions about how a KJV could have possibly been on the ark, others are thrilled about the discovery. For example, Dr. Henry Beeth, professor of New Testament at Bob Jones University, said, "The discovery of the KJV among the remains of Noah's ark confirms what we have always known to be true. God actually first revealed himself in the KJV, long before either the Hebrew or Greek. The writers of the Hebrew Old Testament and Greek New Testament actually translated into their languages from the KJV. In 1611, the translators of the KJV were just going back to the original. We know some folks can't figure out the KJV, but this discovery just proves that it still stands as the perfectly revealed Word of God."

geeee --I am amazed!

questions for these adventurers though --the pictures of long extinct animals in the remnant boards.... I just wonder what this says about a God who first saves and then destroys.... or about evolution at all....

sigh.... This tongue in cheek was a good start to my day! Thanks Peter.