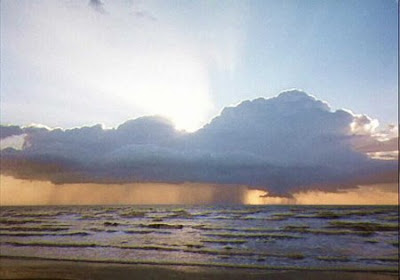 Jesus said his mother and brothers are those who hear the word of God and do it and then encounters his disciples fearful, afraid, and generally freaking out about the waves and the sea. They plead with him in their moment of anxiety and distress and he calms the waves, and the sea, and then he asks them, "Where is your faith?" It occurs to me that anxiety, fear, stress, and distress feed on themselves, and that we may need to, in the words of that Gospel hymn, "Have a little talk with Jesus." I was wholly uninspired by the words of our so-called commander in chief in these last days, perhaps we should turn to Jesus, the great High Priest, second person of the Holy Trinity, Prince of Peace, our Savior and Redeemer. Perhaps a few moments in contemplation would yield just a bit less reactive behavior which seems to be spreading like a storm.

16'No one after lighting a lamp hides it under a jar, or puts it under a bed, but puts it on a lampstand, so that those who enter may see the light. 17For nothing is hidden that will not be disclosed, nor is anything secret that will not become known and come to light. 18Then pay attention to how you listen; for to those who have, more will be given; and from those who do not have, even what they seem to have will be taken away.' 19Then his mother and his brothers came to him, but they could not reach him because of the crowd. 20And he was told, 'Your mother and your brothers are standing outside, wanting to see you.' 21But he said to them, 'My mother and my brothers are those who hear the word of God and do it.'

22 One day he got into a boat with his disciples, and he said to them, 'Let us go across to the other side of the lake.' So they put out, 23and while they were sailing he fell asleep. A windstorm swept down on the lake, and the boat was filling with water, and they were in danger. 24They went to him and woke him up, shouting, 'Master, Master, we are perishing!' And he woke up and rebuked the wind and the raging waves; they ceased, and there was a calm. 25He said to them, 'Where is your faith?' They were afraid and amazed, and said to one another, 'Who then is this, that he commands even the winds and the water, and they obey him?'

"Master, Master, we are perishing!"

Where is your faith?