"You might be Jesus"... on hospitality ~ by Lauren Winner 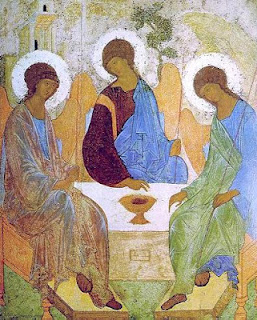 Lauren Winner has much wisdom in her book, "Still: Notes on a Mid-Faith Crisis," which we will be using later this Fall in a course that I am leading at St. Paul's Memorial.  Here is one wonderful reflection on a friend of her who exhibits some radical hospitality:

"My friend Sarah had a run of a few months in which -- because on principle she invites in anyone who knocks on her door -- she hung out with Jehovah's Witnesses every Saturday morning.  Each Saturday, she told them that she wasn't going to convert, but that they were welcome to come in for a cup of tea.  They did, week after week.  "I don't think very may people let them come in, " Sarah says.

Last week, Sarah opened her door to find a traveling salesman.  She invited him in, told him she was not planning to buy a vacuum cleaner and that in fact, because her baby was asleep upstairs, he couldn't turn on his demo model, and then she offered him a cup of coffee.  He asked why she was offering him coffee, when she wasn't even going to let him show her the vacuum cleaner, and she said it was because she worships a God who has said that he may be found in any person, any near or far neighbor, andy prisoner or beggar on the street, any guest.  "So, I'm offering you coffee because you might be Jesus," Sarah said.  The vacuum cleaner salesman said it was the strangest house call he'd ever made, but he took the coffee."

~Lauren Winner in Still: Notes on a Mid-Faith Crisis
Posted by Peter Carey on Wednesday, September 18, 2013