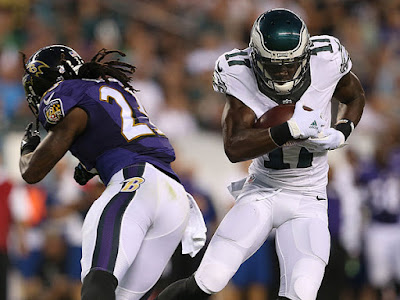 ON HIS WAY home from the NovaCare Complex Monday night, Nelson Agholor had a lot on his mind.

The rookie receiver had come to the facility on the Eagles' off day to get some lifting in, catch some balls on the JUGS machine and work off any leftover frustration from his up-and-down performance in the loss to the Washington Redskins the day before, which featured his spectacular, one-handed catch and fumbled reverse opportunity on consecutive plays.

Agholor, 22, was minutes from home when he telephoned one of his most cherished confidants.

"He was real disappointed in the fumble, but I just think it's more like, 'Hey, I've learned from it and I've got to get better,' " said Dominick Ciao, Agholor's high school football coach at Berkeley Prep in Tampa, Fla., from 2007-11. "He made a great catch. He never spoke about his catch. To him, it's just about getting better."
Read more at http://www.philly.com/philly/sports/20151011_Eagles__Nelson_Agholor_stays_true_to_his_roots_during_rookie_season.html#Phez7vRrsPtOwAWB.99
Posted by Peter Carey on Saturday, October 10, 2015