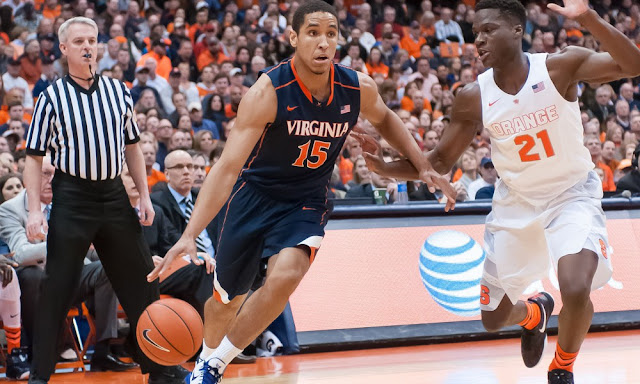 By: Laken Litman | October 15, 2015 12:18 pm
There might not be a more perfect nickname for Malcolm Brogdon than the one his two older brothers gave him years ago.
They call the Virginia guard Humble Moses. It makes sense because Brogdon is modest and his middle name is Moses. He’s also a leader.
The redshirt senior, who was a first-team All-Atlantic Coast Conference pick last season while averaging 14 points a game and played for Team USA in the Pan American Games this summer, is entering his fifth and final year at Virginia, which is ranked sixth in the Preseason Coaches Poll. In this time, he’s helped coach Tony Bennett restore a program that regularly competes among the ACC’s elite and for national titles.
And while putting in work on the court, Brogdon also has been pursuing his master’s degree in public policy from the renowned Frank Batten School of Leadership and Public Policy.
Somehow, he finds the time.
“People don’t realize how motivated he is,” Bennett says. “I think his nickname is awesome because Moses was one of the humblest men. He was the prince of Egypt and had great courage going to Pharaoh. That’s like Malcolm. He’s very driven, very purposeful in what he does, but he has a humility and is unaffected by things that come his way. He has a plan, and he’s going to stay true to who he is.
“He knows what his future is about, and he’s going to make a difference.”
Read it all HERE
Posted by Peter Carey on Thursday, October 15, 2015