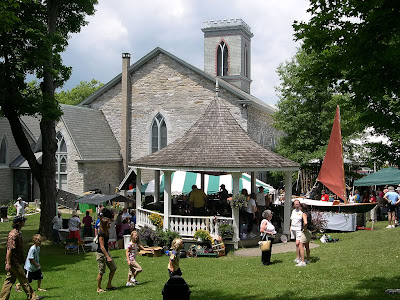 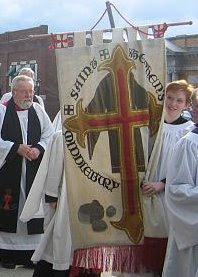 I grew up in the church at St. Stephen's Episcopal Church in Middlebury, Vermont, and had the honor of carrying the banner of the church (depicted above) while I was an acolyte - St. Stephen's Feast Day is today, and his is a life well-worth remembering. You will see Stephen's dalmatic (the tunic-like clothing the deacons wore, and still wear in liturgy today), as well as the stones which represent the way that Stephen was martyred.

The Feast of St. Stephen is remembered in the hymn, "Good King Wenceslas looked down, on the Feast of Stephen," and St. Stephen is remembered as the Church's first martyr and one of its first deacons, commissioned to care for the widow and orphan, and as some also say, the "least, the last, and the lost." Along the way to becoming a priest in the Episcopal Church, we spend at least six months as a transitional deacon, in which we are to live out diaconal ministry - from the Greek - diakonos, which means servant, to care for others, to be "in the world" and not merely in the sanctuary. But this calling of diaconal ministry is the calling of all Christians, to love one another as God loves us, to love our enemies, to visit the sick and those in prison, to feed the hungry, to clothe the naked, and care for all those in need. So, today, we remember St. Stephen and the diaconal ministry that he embodied, and we pray that we might also live out this calling in our own time.

1 Now during those days, when the disciples were increasing in number, the Hellenists complained against
the Hebrews because their widows were being neglected in the daily distribution of food. 2And the
twelve called together the whole community of the disciples and said, 'It is not right that we should
neglect the word of God in order to wait on tables. 3Therefore, friends, select from among yourselves
seven men of good standing, full of the Spirit and of wisdom, whom we may appoint to this task, 4while we,
for our part, will devote ourselves to prayer and to serving the word.' 5What they said pleased the whole
community, and they chose Stephen, a man full of faith and the Holy Spirit, together with Philip, Prochorus,
Nicanor, Timon, Parmenas, and Nicolaus, a proselyte of Antioch. 6They had these men stand before the
apostles, who prayed and laid their hands on them. 7The word of God continued to spread; the number of the
disciples increased greatly in Jerusalem, and a great many of the priests became obedient to the faith.

7 Endear yourself to the congregation;
bow your head low to the great.
8 Give a hearing to the poor,
and return their greeting politely.
9 Rescue the oppressed from the oppressor;
and do not be hesitant in giving a verdict.
10 Be a father to orphans,
and be like a husband to their mother;
you will then be like a son of the Most High,
and he will love you more than does your mother.