And, even more memories of VTS Chapel 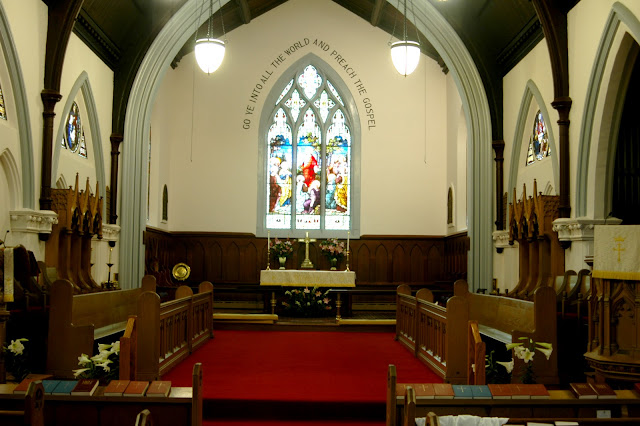 More memories of VTS Chapel, purely my own, purely from my own memory...


Chapel Memory #1 - The baptism of my son on the Easter Monday in 2006 along with wonderful sermon by the Rev. Michael White (now of Savannah), and celebrant the Rev. Joseph Constant (of VTS), and drumming by yours truly and the Rev. Lester MacKenzie (from South Africa, now in LA), and guitar by the Rev. Joseph Hensley (of Durham, NC)..."marching in the light of God," "I want to walk as a child of the light...'

Chapel Memory #3 - Sitting in the balcony next to theological ethicist Stanley Hauerwas (of Duke University) (who knew the Book of Common Prayer Service by heart) who turned to me and said how glad he was that we were singing so many Wesley hymns.
Chapel Memory #4 - Preaching my "Senior Sermon" there - was nervous as all get-out. 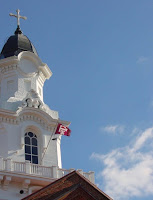 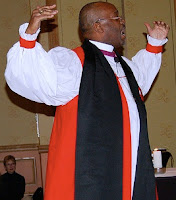 Chapel Memory #6 - Hearing the Rt. Rev. Michael Curry (of the Diocese of North Carolina) preach, and seeing him shake the pulpit with such force that we thought he was going to get it unhinged.

Chapel Memory #7 - Attending many many community Eucharists with my family in the evening, only to have to bring my young son outside during the service - and playing out there on the circle of grass with him and with the other kids while others prayed and heard the sermon.  Perhaps letting me know just how hard it can be to bring kids to church.

Chapel Memory #8 - Trying to kneel during the services and never really having enough room to get my feet under the pew that I had been sitting on.  People must have had smaller feet 130 years ago, or they were more flexible, or both.
Chapel Memory #9 - Singing the fraction anthem for the first time, very nervous, but great fun!
Chapel Memory #10 - A particular sermon by the Rev. Dr. Tony Lewis on the Gerasene Demoniac, in which Tony unpacked the story in about 3 1/2 minutes - amazing.

Chapel Memory #11 - Taking Liturgics Practicum from the Rev. Andrew Merrow, learning a bit how to preside over the mysteries at the altar, I think of that space and those lessons often when I am presiding at the Eucharist.

Chapel Memory #13 - Witnessing the Most Rev. Desmond Tutu baptize the son of the Rev. Dr. Michael Battle.  Desmond Tutu is a gift.

Chapel Memory #14 - Hearing the Rev. Dr. Katherine Grieb give a sermon in which she referenced the "White Washed Tombs" in Matthew 23:27 and likened them to the white monuments of Washington, DC, calling upon us all to do more than merely remember the poor and oppressed - but get busy!

Chapel Memory #15 - Assisting at the "Table" next to Bishop Marc Dyer at (what was then called) an Experimental Noonday Eucharist and noting his rather unique way of celebrating the Eucharist, influenced I'm sure, by his work with the Eastern Orthodox Church.
Posted by Peter Carey on Thursday, October 28, 2010

I'm so very sorry for the loss of the chapel at VTS. The Episcopal parish church where I was confirmed and married in Nashville, TN was destroyed by a tornado back in 1998, so I know how it feels. It's like the death of a dear friend. My prayers are with all affected by this tragedy.

Thanks so much. I'm sure it will hit me even more when I visit next. I am really praying for those who are students now, and for those who worship there regularly...so tough, so so tough. I have found some solace in a few items that survived, especially the brass cross and the baptismal font - along with the "mission windows"...