The Very Rev. Charles A. Perry, Rest in peace and rise in glory 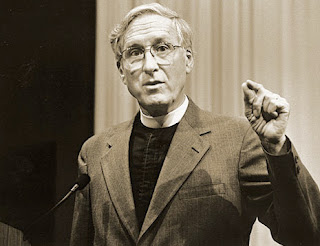 The Very Rev. Charles A. Perry died last Saturday and my friend Jim Richardson wrote the following tribute in his "Fiat Lux" blog:

May Charles rest in peace and rise in glory!


"I have fought the good fight, I have finished the race, I have kept the faith. From now on there is reserved for me the crown of righteousness."

2 Timothy 4:6, the epistle for Sunday

Yesterday morning, just before we got started with the 10 am service, I received very sad news: my dear friend and mentor, Charles Perry, had died suddenly the night before. On a trip to North Carolina, he had sat down on his bed and collapsed. He had just finished watching the Giants get into the World Series, and yes, he was a Giants fan.

Charles and his wife Joy had been members of St. Paul's Memorial Church for many years. The announcement of his death was met with gasps at our 10 am service Sunday.

The Very Rev. Charles A. Perry was a giant in the Episcopal Church. He had been the Provost of the National Cathedral and then, after his retirement from that position, became the Dean and President of the Church Divinity School of the Pacific in Berkeley, Calif., the seminary from where I graduated.

Charles had been immersed in every major church issue of the last 40 years. He completed the construction of the National Cathedral and put the cathedral on a firm financial footing. At CDSP he had presided over a difficult era of transition into a more inclusive and wider vision for theological education. Some very good priests came through CDSP in his time.

Email ThisBlogThis!Share to TwitterShare to FacebookShare to Pinterest
Labels: Charles A. Perry