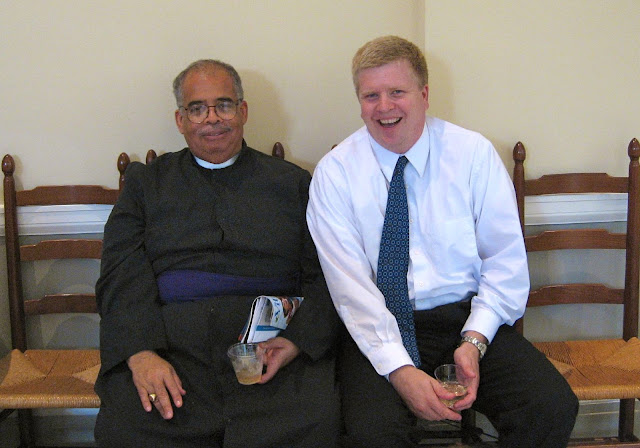 My former professor of Koine Greek and New Testament, The Rev. Dr. Lloyd Lewis (Tony Lewis) is retiring this year, and is being honored tonight at VTS.  Below is what the Dean and President of VTS wrote on this occasion.

Tony is a great priest, a great teacher, a great soul, and I was privileged to learn so much from him about being a priest in God's church.

Tonight we will honor a distinguished scholar, teacher, and faculty member.  The Rev. Dr. Lloyd Lewis (otherwise affectionately known as Tony Lewis) was a student here (1969-1972), a faculty member (twice), and a dedicated advocate for the Seminary.  He was the first African American student at St. Stephen's School; he was one of the initial African American students at the Seminary; and he was one of the first African American faculty.  His journey has reflected the journey of the United States and the journey of the Episcopal Church.

Tony is first and foremost a priest.  This is his primary identity.  He has faithfully served the people of God through Word and Sacrament; he loves to bring to the people of God the gift of the Good News of Jesus Christ; and he loves serving at the altar.  Over the last eighteen months, he has been a Faculty chaplain, making himself available to students as problems arise.  He embodies gentle compassion.

Tony has given his life to this Seminary.  With his enormous gifts, he could have so easily had other opportunities within the Church.  But his passion for the Seminary became his priority.  He wanted to ensure that the Seminary would flourish.

Perhaps among his many legacies is the passion that he transmitted for the learning of languages.  Tony wanted students to learn the original language of the New Testament - to read beyond the English translation and understand just a little better the mindset of the author.  Tonight there will be an Evensong in his honor.  Tonight we will unveil the portrait which will hang in the refectory depicting Tony in his Yale academic regalia standing next to the baptismal font at St. Paul's K Street. He is holding "Lift Every Voice and Sing." The great themes of Tony's life are captured in the handsome portrait. Tonight is an opportunity for the Seminary to honor greatness.  Tony Lewis has been remarkable; tonight we will celebrate his many achievements.