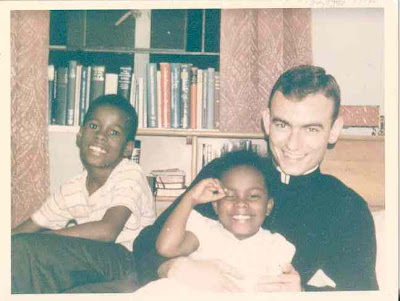 found on the Episcopal Cafe today:

The disappointments of Holy Week and the bitterness of [the segregated seating in the left rear pew for] Easter Communion at St. Paul's forced our eyes back to the inscription over the altar. "He is not here. For he is risen." In a dreadful parody of their meaning, the words seem to tell a grim truth that was not exhausted by their liturgical import.

This is the stuff of which our life is made. There are moments of joy and moments of sorrow. Almost imperceptibly, some men grow in grace. Some men don't. Christian hope, grounded in the reality of Easter, must never degenerate into optimism. For that is the road of despair. Yet it ought never to conclude that because its proper end is heaven, the church may dally at its work until the End is in sight. The thought of the church is fraught with tensions because the life of the church is caught in tension. For the individual Christian and the far-flung congregation alike, that is part of the reality of the Cross. There are good men here, just as there are bad men. There are competent leaders and a bungler here and there. We have activists who risk their lives to confront a people with the challenge of freedom and a nation with its conscience. We have neutralists who cautiously seek to calm troubled waters. We have men about the work of reconciliation who are willing to reflect upon the cost and pay it. Perhaps at one time or another, the two of us are all of these. Sometimes we take to the streets, sometimes we yawn through interminable meetings, sometimes we talk with white men in their homes and offices, sometimes we sit out a murderous night with an alcoholic and his family because we love him and cannot stand apart. Sometimes we confront the posse, and sometimes we hold a child. Sometimes we stand with men who have learned to hate, and sometimes we must stand a little apart from them.

Our lives in Selma are filled with ambiguity, and in that we share with men everywhere. We are beginning to see the world as we never saw it before. We are truly in the world, and yet ultimately not of it. For through the bramble bush of doubt and fear and supposed success we are groping our way to the realization that above all else, we are called to be saints. That is the mission of the Church everywhere. And in this Selma, Alabama, is like all the world: it needs the life and witness of militant Saints.

From the sermon "But My Heart is Black," by Jonathan Myrick Daniels; found at http://www.episcopalarchives.org/Afro-Anglican_history/exhibit/pdf/escru_jd_myheartisblack.pdf
Posted by Peter Carey on Friday, August 14, 2009